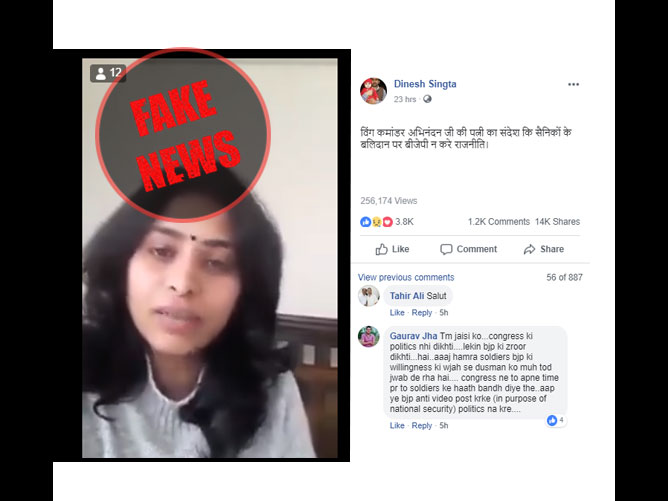 New Delhi (Team Vishvas). A video is going viral on social media in which a woman can be seen appealing to the government not to politicise the sacrifice of the soldiers. According to the description, the woman in the video is the wife of Indian Air Force Wing Commander Abhinandan who was in the captivity of Pakistani Army. In our investigation, we found that the woman in the viral video is not the wife of Wing Commander Abhinandan.

In the video being shared, this lady says, ” Hello everyone I am wife on an army officer, I request all Indians and political leaders not to politicize the sacrifice of our soldiers. It takes so much to be a soldier and imagine the kind on pain the family of Abhinandan is going through. So please, at least till the tension is eased at the Indo-Pak border, stop your rallies, and don’t you dare to snatch away the credit of our soldiers. You have enough time to play politics but not now. It’s my humble request specially to the BJP political leaders”.

The video is going viral with the description “The message of the wife of Wing Commander Abhinandan, BJP should stop politicizing the sacrifice of soldiers”.

We first analyzed this video. In the beginning of this video, the woman says that she is the wife of an army officer while Wg Cdr Abhinandan is an Indian Air Force official. The difference is clear. In our further investigation, we used Invid tool and searched the key frames on Google reverse image. We did not find anything concrete.

When we tried to find this video on YouTube, we found a YouTube channel named Pakistan News, where this video was uploaded first with this description “Wife of Indian Army Officer to Modi Government – Pakistan News”.

Pakistan News is a Pakistani YouTube news channel. We checked this video on Youtube Data Viewer and found that this video was uploaded on February 28 at 10:28 am.

In our further investigation, we found a user who had shared this video with the description: “Humble request to our political leaders do not count your seats at the cost of soldiers ………. by Sirisha Rao, Wife of Army Officer.” We searched Sirisha Rao on Facebook but could not find her.

We searched further and found a woman user who had shared this original video. This lady had shared the tweet of a woman named Sirisha Rao. We opened this tweet and found that Sirisha Rao had tweeted this on February 27 at 11:37 pm.

Sirishra Rao was the first person to share this video and after seeing the profile picture it becomes clear that the woman in the video is indeed Sirisha.

On being asked, Sirisha said that “I am a woman of a military officer.. a responsible citizen of India. I shared my feelings as our sentiments were hurt by some politicians.”

Conclusion: In our investigation we found that the woman in the video that is going viral is not the wife of Wing Commander Abhinandan. The woman is actually the wife of an army officer and her name is Sirisha Rao.