Fact Check: This image of Protest against CAA in Kolkata viral with fake claim﻿ 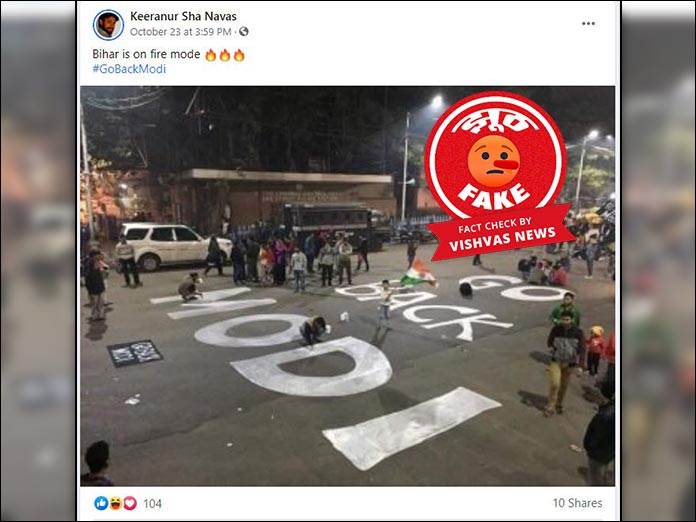 New Delhi (Vishvas News). Amid the first phase of the Bihar assembly elections, many political posts are viral on social media recently. We found one such viral post with ‘Go Back Modi’ slogan claiming to be as from Bihar.

Vishvas News investigation revealed the claim is fake. The picture of protest in West Bengal against the Citizenship Amendment Act (CAA) is now viral as from Bihar.

Many other users on have shared this picture with similar claims on different social media platforms.

We searched this image on the Internet using Google reverse image search tool and found it in a tweet posted by journalist Mayukh Ranjan Ghosh from his verified Twitter profile on 11 January 2020. Sharing the picture, Ghosh wrote, “This is one of the busiest roads in Kolkata. #Esplanade. Lakhs and lakhs of people commute, jam packed traffic r seen. Just look at this place tonight. Roads turned into graffitis, no traffic, all roads blocked, students protesting overnight. This is #Kolkata #modiinkolkata.”

Another social media user ‘Madhurima has also shared the viral photo along with three other photos from her twitter account describing them to be from Esplanade in Kolkata.

On searching the Internet using this keyword, we found a photograph in an article published by ‘The Hindu’ on 3 February 2019 in which West Bengal Chief Minister Mamata Banerjee can be seen seated in front of the wall in the viral photo. The caption reads, “West Bengal Chief Minister Mamata Banerjee sits in a dharna at the Metro Channel Control Post of the Hare Street Police Station in Kolkata’s Esplanade.”

We also found this picture on Getty describing as from Kolkata.

Google Map also confirms this location (Metro Channel Police Station, Esplanade) in Bengal. We could confirm that the picture is from an old protest in Kolkata and not from Bihar as in the claim.

Vishvas News contacted Mayukh Ranjan Ghosh to verify the claim.  “The viral picture is from the protests against the Citizenship Amendment Act in West Bengal in January. It was the scene outside the metro channel, which falls under the jurisdiction of the Hare Street Police Station…” said Ghosh.

Social scanning of the user who shared the viral picture has declared to be from Coimbatore, Tamil Nadu and has 0ver 800 followers.

Conclusion: The viral picture is not from Bihar. It is from an anti CAA protest in Kolkata, West Bengal.