Fact Check: This is an old video from Rajasthan, has no connection with Assam NRC

We found in our investigation that this claim is false. In fact, this video is from Jaipur in Rajasthan, where a scuffle broke out between the civilians and the police after a demolition drive on August 2, 2019. 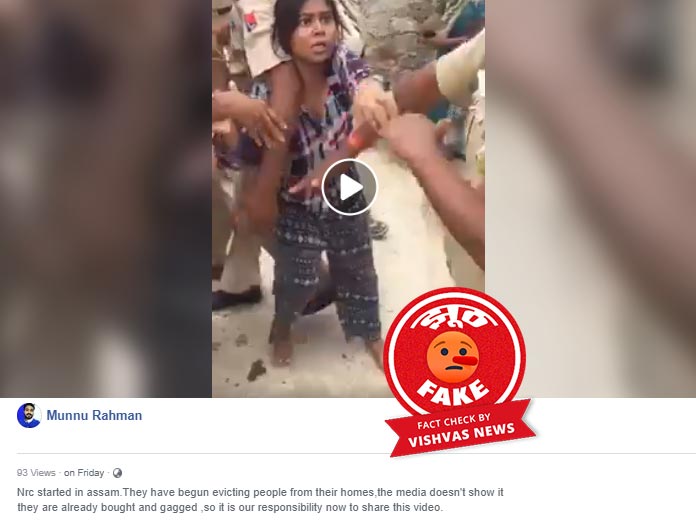 Vishvas News(New Delhi) A video is going viral on social media showing scuffle between police personnel and civilians. The video has been shared on various platforms of social media with the claim that Assam police is forcefully picking up those whose names are missing from the NRC list. We found in our investigation that this claim is false. In fact, this video is from Jaipur in Rajasthan, where a scuffle broke out between people and police personnel after a demolition drive on August 2, 2019.

The viral video is 22 seconds long. In the video, a scuffle between police and people can be seen. The video description reads “Nrc started in assam. They have begun evicting people from their homes, the media does not show it, they are already bought and gagged, so it is our responsibility now to share this video.”

We examined the video properly. In the video, women are wearing saari, which is not very popular attire in Assam.

Now we took out the keyframes of this video with the use of Invid tool. We then searched these keyframes on Google reverse image. We came across a link on a YouTube channel that contained the viral video. The video was uploaded on 6 August 2019. The video’s title was “Police Atrocities” and the description read: “For the last few days some unknown policemen have been coming to our residence Plot No. 6/7 Laxmi Nagar Colony, Samaria Road Kanota, Jaipur and threatening us. They torture us mentally, physically and today on 02-08-2019, about 15 policemen came from Chandwaji police station and demolished our house in Kanota. They came with JCB machines. The policemen had no administrative notice or JDA notice yet they all forcibly started demolishing our house and when we wanted to stop, they started beating the women in our house and also hit our paralyzed father badly, which has made his condition very serious.”

We also found a tweet in this regard. The video was tweeted on 7 August 2019 by a Twitter handle @sarchana1016 with the description “People are praising Modi on section 370 but houses of Dalits and Adivasis are being demolished all over India. Lands are being captured! The video is from Samaria Road Kanota Jaipur. Police are demolishing the house with JCB machine. These policemen should be immediately sacked.”

We also read all the comments on this tweet. On 9 August 2019, Jaipur Police replied on this tweet by sharing a screenshot of a news report from patrika.com, indicating that the encroachers attacked the police.

We were able to find that news on Rajasthan Patrika’s ePaper.

We spoke to Kuldeep Shekhawat, SHO of Kanota Police Station for further confirmation, who confirmed that the video is from Kanota in Rajasthan when the wall on an encroached ground was demolished by the police on August 2, 2019, after which a scuffle broke out between police and trespassers.

Many people are sharing this post on social media. One of them is a Facebook user named Munnu Rahman. According to this profile, the user is from Hyderabad. The user shared this post on 18 January 2020.

Conclusion: We found in our investigation that this claim is false. In fact, this video is from Jaipur in Rajasthan, where a scuffle broke out between the civilians and the police after a demolition drive on August 2, 2019.