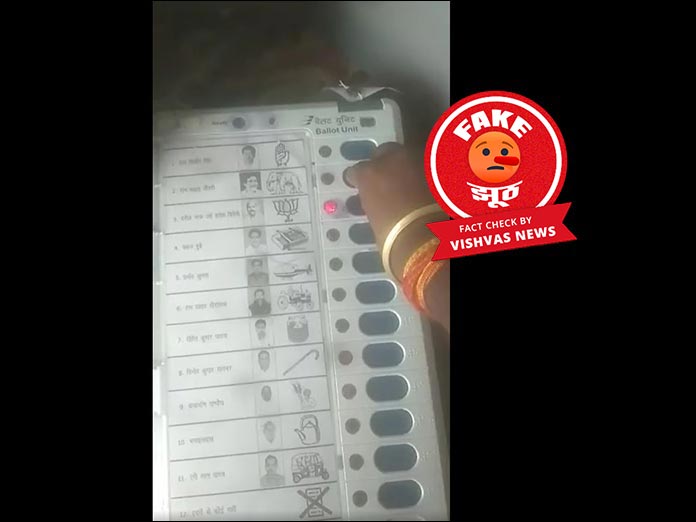 New Delhi (Vishvas News). Amid the first phase of Bihar Bihar assembly elections, a video of a tampered Electronic Voting Machine (EVM) is viral on social media with a claim that it is from the ongoing elections.

Vishvas News investigation revealed the claim is fake.  The viral video has been on social media for a long time since the the Lok Sabha elections last year.

Sharing the viral video (archive link ) featuring a tampered EVM, Facebook user Md Imtiyaz wrote, “In the first phase of voting, the game has started..” The user had alleged that clicking on to the elephant symbol, casts the vote to the Lotus (BJP).

Many other users have shared this video with similar claims.

We first uploaded the viral video to the InVID tool and extracted keyframes. We searched them on the Internet using Google reverse image search tool. We found this video shared by many other social media users since last year.

We also found news articles published in April 2019 that described about this incident. An article in the Navbharat Times states, “While complaining of EVM tampering, UP Bahujan Samaj Party has written a letter to the Election Commission. The BSP has alleged that in some booths, the vote has gone to the BJP despite pressing the button in front of BSP’s symbol elephant… BSP general secretary Satish Chandra Mishra has also sent a clipping of the EVM to the Election Commission.”

We could confirm that the viral video is old and is not related to ongoing Bihar Assembly elections. Bihar assembly elections are held in 3 phases. While the first and second phase of poling has concluded on 28 October and 3 November, the final phase is scheduled on 7 November.

We observed the video for investigation. We identified the party and candidates from the list pasted on the EVM (Raj Kishore Singh from INC, Ram Prasad Chaudhary from Bahujan Samaj Party and Harish Dwivedi from BJP).

We searched on the Internet with these keywords and found a link a news article published in the Dainik Jagran. The report states that these candidates contested in 2019 Lok Sabha elections from Basti, Uttar Pradesh.

Vishvas News contacted Basti’s Assistant Election Officer Arun Kumar Singh to verify this video. “No such incident has come to our notice. In the last Lok Sabha election, many cases were reported about defective EVMs and they were replaced before elections as per the procedure. This happens in elections and in every district, reserve EVMs are also arranged in view of the possible defect,” said Singh.

Singh could not confirm if this video was related to the Lok Sabha elections held in Basti last year. However, he clarified that someone has deliberately made the EVM look defective.

Bihar assembly election is the first major election to be held amid the Corona pandemic and the Election Commission has issued special guidelines to ensure the safety of voters. Accordingly, voters are required to wear gloves to press the EVM button and Election Commission provides gloves to every voter at the polling station.

We could see that the person who is pressing the EVM button in the viral video is not wearing gloves. Moreover we did not find any news reports on the alleged tampering of EVMs from Bihar recently. Vishvas News also contacted Sanjay Kumar Singh, Additional Chief Electoral Officer of Bihar. But we could not get any response from him.

Vishvas News also does not make any claims regarding the source and origin of the viral video, but our investigation confirms that this video is not from ongoing Bihar elections.

Social scanning of the user who shared the viral video revealed that he is a resident of Sitamarhi, Bihar and has more than three thousand followers on Facebook.

Conclusion: The viral post is fake. The video alleging of defective EVM is old and not from ongoing Bihar Assembly Elections.