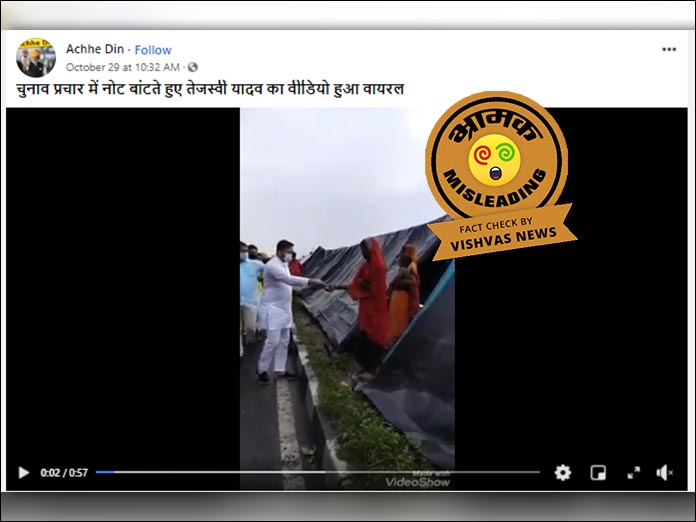 New Delhi (Vishwas News). Amid the ongoing elections in Bihar, a video of Rashtriya Janata Dal leader Tejashwi Yadav offering money to people is viral on social media with a claim that he is distributing money to buy votes.

A viral video of RJD leader Tejashwi Yadav is shared with a claim that he is distributing money to the people during election campaign. The archived version of the viral post can be seen here.

We first uploaded the viral video to the InVID tool and extracted keyframes. We searched them on the Internet using Google reverse image search tool.

We found a video on Tejaswi Yadav’s Facebook page uploaded on 31 July with description stating that Yadav shared his grief and pain with flood victims in Pipra Assembly Constituency. This 16-minute video matches the viral video clipping exactly at the fifth minute.

We also found a news report stating that Tejashwi Yadav visited flood-affected areas in Champaran and provided money to the victims.

We contacted Dainik Jagran’s Patna correspondent Ashish Kumar to verify the claim.  “This video is from July, while the Election Commission announced the dates of Bihar assembly elections in September. The model code of conduct begins once the election dates are announced and lasts until the result is declared. It would be wrong to say that Yadav distributed money during the election campaign,” said Kumar.

Bihar assembly elections are held in 3 phases. While the first and second phase of poling has concluded on 28 October and 3 November, the final phase is scheduled on 7 November.

Conclusion: The viral post is fake. This viral video is old and Yadav was offering money to flood victims.