Fact Check: This photo is from an old protest held in Kolkata, and has no link with PM Modi’s latest visit to Tamil Nadu

The viral claim turned out to be false in the investigation of Vishvas News. The picture that is going viral with the claim of protests against Prime Minister Narendra Modi’s visit to Tamil Nadu is related to the old protests in Kolkata. 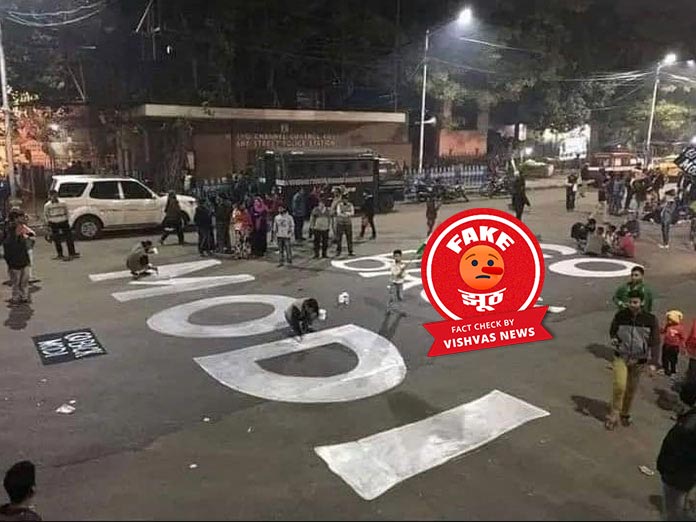 The content of the post has been written exactly for the purpose of a fact check. The archived version of this post can be viewed by clicking here.

To know the truth of the viral picture, we searched the photo through Google reverse image. We found the viral picture in a tweet by Kolkata-based journalist Mayukh Ranjan Ghosh. In this tweet on 11 January 2020, Mayukh Ranjan Ghosh wrote, “This is one of the busiest streets in Kolkata, Esplanade. Lakhs of people commute, and jammed traffic is seen. Just look at this place tonight. Roads turned into graffiti, no traffic, all roads blocked, students protested overnight. This is #Kolkata #modiinkolkata “

A user named মধুরিমা (Madhurima) also tweeted this picture from its Twitter account. In this tweet made on 11 January 2020, along with the viral picture, many more pictures related to this protest were also found. Sharing the pictures, user wrote, “Now Esplanade. Students painting on the street. Loud and clear message from Kolkata.#GoBackModiFromBengal Modi is afraid of students and youth. Avoid the road. Protests continue across the city.”

From here we proceeded with our investigation and went through the shared picture carefully. In this, we saw “Metro Channel Control Post, Hare Street Police Station” written on sidewalks. We searched the keywords seen in the picture on Google. We searched and found that this place is in Kolkata.

Confirming this, Dainik Jagran’s Kolkata Bureau Chief JK Vajpayee said, “This picture is of the protest against the Citizenship Amendment Act in Kolkata. Nothing like this has happened here recently. The picture is being viral with the wrong claim.”

This picture had gone viral once before with the same claim. Which was investigated by Vishvas News. You can read our earlier investigation here.

We scanned the Facebook profile of the user “Pasupathi Viswanathan” who shared the fake claim. According to this, the user is a resident of Kuala Lumpur, Malaysia.

Conclusion: The viral claim turned out to be false in the investigation of Vishvas News. The picture that is going viral with the claim of protests against Prime Minister Narendra Modi’s visit to Tamil Nadu is related to the old protests in Kolkata.