Fact Check: This video is from West Bengal, not Uttar Pradesh 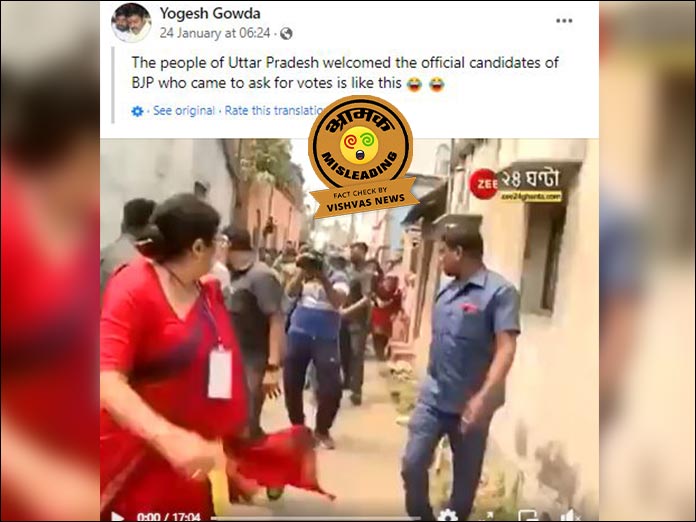 New Delhi (Vishvas News). A video is going viral on social media, in which some people can be seen chasing a woman leader and asking her to leave. Now, this video is going viral by linking it with Uttar Pradesh elections. While sharing the viral video, users are claiming that the BJP candidate, who came to seek votes in Uttar Pradesh, was scared away by the people. When Vishvas News checked this video, we found that this video is not from Uttar Pradesh. The viral video is from West Bengal, April 2020, when the BJP candidate was chased by people.

Sharing the video, a Facebook user wrote, ‘This is how the people of Uttar Pradesh welcomed the official candidates of BJP who came to seek votes.’

To start our investigation, we first watched the video carefully. The logo of the channel ‘Zee24 Ghanta’ can be seen in the video. We started searching for the video with keyword search on this YouTube channel. On searching, we found this video uploaded on 10 April 2021. According to the information given in the video, ‘Locket Chatterjee amid strong protests in Chuchura, election violence around the locket’s car.’

We also got the news video related to this matter on the YouTube channel of ABP News. According to the video uploaded on 10 April 2021, ‘BJP candidate Locket Chatterjee’s car was attacked in Hooghly, West Bengal.’ The full video can be seen below.

Vishvas News contacted Vishal, a Kolkata-based reporter of Dainik Jagran, for confirmation. Giving information related to the viral video, he told us, “This video is from last year’s Bengal election. At that time BJP candidate Locket Chatterjee had gone to Chuchura, when allegedly TMC people raised slogans of ‘Go Back’ and asked their convoy to leave.

In social scanning of the Facebook user who shared the misleading post, we found that the user is a resident of Tumkur and as per the bio given on Facebook, he is a politician.

Conclusion: Vishvas News checked this video and we found that this video is not from Uttar Pradesh. The viral video is from West Bengal, April 2020. It has nothing to do with Uttar Pradesh elections.