Fact Check: This video of falling billboard injuring a motorcyclist is not from Chennai, viral claim is fake

The viral post is fake. The video of man injured by falling billboard is not from Chennai, India. The incident is from Karachi, Pakistan. 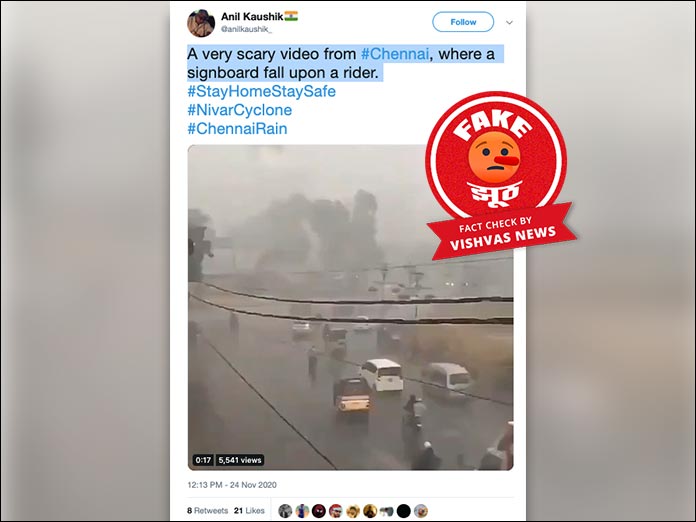 New Delhi (Vishvas News). A video of a billboard falling off suddenly in middle of a moving traffic, injuring commuters is viral on social media with a claim that it is from Chennai, India.

Vishvas News investigation revealed the claim is fake. The incident captured in the video is from Karachi, Pakistan.

A video of a billboard falling upon a motorcyclist is viral on social media with a claim that it is from Chennai amid Nivar Cyclone. The archived version of the post can be seen here.

We also found this same video has been viral on Facebook even in the past claiming as from Hyderabad.

An article in the Jagran.com states, “The low pressure area in the Bay of Bengal has turned into a severe cyclone ‘Nivar’. The storm is slowly intensifying and is likely to hit the coast of Tamil Nadu and Puducherry at night. During this time, winds will go at a speed of 100-110 kmph, which will reach 145 kmph later… Heavy rains have started in Chennai and Kanchipuram. In the wake of the storm, South-Western Railway has canceled two trains scheduled for tomorrow. Apart from this, 26 flights to and from Chennai have also been cancelled.”

We also found news reports on safety precautions by the government. “Around 1,200 NDRF personnel have been deployed in Tamil Nadu, Andhra Pradesh, while 800 more are on standby as Nivar, a ‘very severe cyclonic storm’ is expected to make landfall on Wednesday,” states an article in Jagran English.

However, we did not find any authentic news reports confirming the viral claim of commuters injured in Chennai.

We first uploaded the viral video to the InVID tool and extracted keyframes. We searched them on the Internet using Google reverse image search tool. We found this video in a tweet posted on 7 August, identifying the location of incident as Avari Hotel in Karachi, Pakistan.

We searched on the Internet for news using keywords. We found this video uploaded by MTV PAK on YouTube with description about the horrific incident in Karachi.

“Two motorcyclists were injured when a large billboard came loose and collapsed on them near Metropole Hotel during heavy rainfall. Footage of the incident went viral on social media, showing the billboard being blown down on traffic by strong winds, hitting two motorcyclists on the road… Following the incident, the Karachi commissioner’s office issued a notification on Friday ordering the immediate removal of billboards and other advertisement material from the city’s streets in order to avoid loss of human life and damage to property,” described an article in The Press News Agency website.

Vishvas News contacted Zubair Ashraf, Journalist with The News International in Karachi, Pakistan to verify the claim. Sharing to us a link to an article by the Tribune, he clarified to us that this incident occurred in Karachi during the August rains in the city. Ashraf added that the injured man miraculously survived and later pardoned the defendants out of the court on the account that it was an act of God.

Social scanning of the Twitter user who shared the viral video revealed that he is a resident of New Delhi, India and has 271 followers for his profile. His account is active since November 2017.

Conclusion: The viral post is fake. The video of man injured by falling billboard is not from Chennai, India. The incident is from Karachi, Pakistan.