The viral post is fake. UP Prohibition of Unlawful Religious Conversion prohibits forceful conversions. It allows willing conversions with two months prior notice to the District Magistrate. 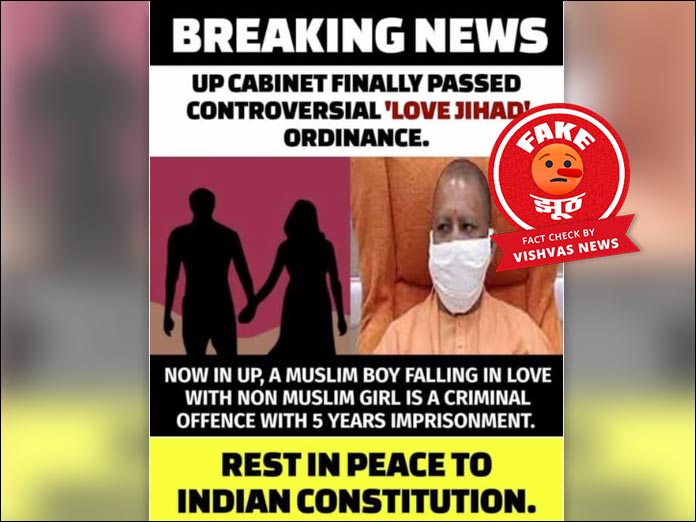 Vishvas News investigation revealed the viral claim is fake. UP State Law Commission refuted the claims and clarified that the viral post have misinterpreted the ordinance.

Several users have shared a viral post on Twitter that reads, “UP cabinet passes ‘love jihad’ ordinance. Now a Muslim boy falling in love with a non-Muslim girl is a criminal offence with 5 years imprisonment. P.S It’ll be abused the most against Muslims…”

We also found this claim on Facebook shared with pictures.

The ordinance lays down a jail term of 1-5 years and a fine of Rs 15,000 as a punishment for indulging in forced conversion and in case of forcible conversion of minors or SC/ST women, the jail term will increase to 3-10 years and fine amounting to Rs 25,000. In case of community mass conversion, the violator will face jail term between 3-10 years and a fine worth Rs 50,000 will be slapped on the organisation behind the move. The organisation’s licence would also be cancelled.

The article has also clarified that if an individual willingly wants to convert for marriage then, he/ she will have to give two months notice in advance to the concerned district magistrate. If the person fails to do so then, the violator will invite a fine of at least Rs 10,000 and a jail term of six months to three years.

However, we did not find any news report confirming the viral claim.

He also explained to us the categories of punishment under the ordinance where unlawful religious conversions would attract jail term from three to ten years.

Responding to us on call, Sapna Tripathi, Secretary of Uttar Pradesh State Law Commission also clarified to us that the ordinance is not against any specific religion as in the claim, but prohibits unlawful conversions.

Conclusion: The viral post is fake. UP Prohibition of Unlawful Religious Conversion prohibits forceful conversions. It allows willing conversions with two months prior notice to the District Magistrate.