Fact Check: UPSC has not reduced maximum age limit from 32 to 26 years for civil services examination 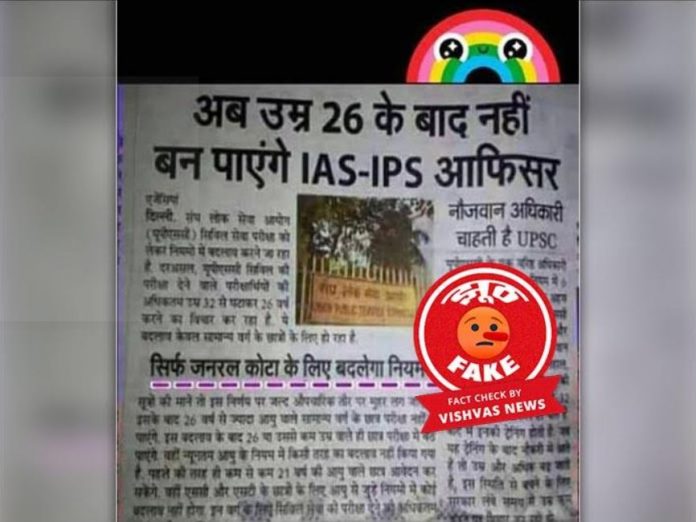 New Delhi (Vishvas Team). A newspaper clipping shared on WhatsApp claims that the maximum age limit to appear for civil service examinations (IAS, IPS) has been reduced to 26 years.

Vishvas News received this claim for fact check on its Fact Checking WhatsApp chatbot (+91 95992 99372). Vishvas News investigation revealed the claim is fake. The Commission has not reduced the maximum age limit for the Civil Services Examination.

The viral photo of a newspaper clipping, titled – IAS —IPS officer will no longer be able to appear for exams after 26years of age.

We first read the news clipping and found in the very first paragraph that UPSC is yet to decide on reducing the maximum age limit for civil examination candidates from 32 to 26 years. The article has not mentioned anywhere about a sure decision to reduce age limits.

We searched the viral picture using Google reverse image search tool and found that this post has been viral since 2016. When we searched the Internet with keywords, we found several media reports published in August 2016 that suggested the reduction of the maximum age limit, but the Commission has not yet taken this decision.

The maximum age limit stated in the civil services Examination 2019 notification on the official website confirms that there was no reduction in age limit.

Vishvas News contacted Rohit Verma of the Delhi-based Elite IAS Academy, who stated that the maximum age limit for appearing in the IAS and IPS exams is 32 years for general category, while 35 years for OBC and 37 for SC / ST. “The viral post is fake. UPSC has not reduced the age limit to 26 years,” said Verma.

Conclusion: UPSC has not reduced the maximum age limit for civil service examination from 32 years to 26 years.