Fact Check: Video Of Lathicharge During Durga Idol Immersion in Munger is viral with fake claim 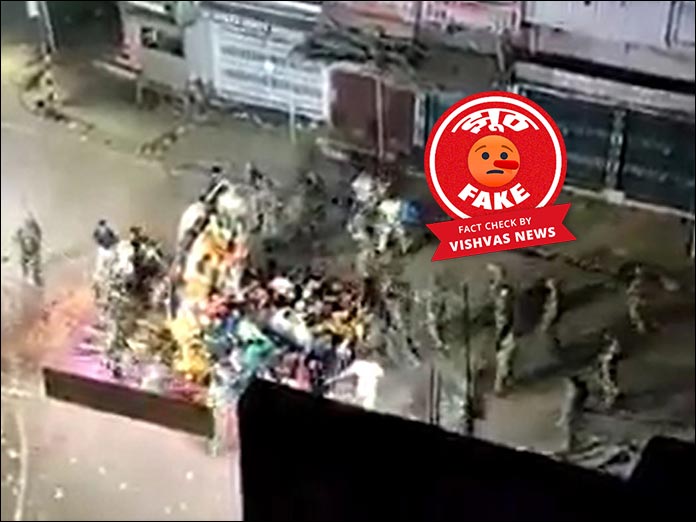 New Delhi (Vishvas News). A video featuring lathi charge in a religious procession is viral with a claim that the incident happened in West Bengal.

Vishvas News investigation revealed the claim is fake. The viral video is from Munger district in Bihar and not from West Bengal.

Facebook User Krishnendu Kar shared a video of police violence in a religious procession writing, “Police attack on Hindu people in the state (West Bengal)!” The archived version of the viral video can be seen here.

Many other users have shared this video with similar claims as from Bengal.

Vishvas News investigation revealed that the video is from Bihar’s Munger district, where police lathi-charged in procession before immersion of Goddess Durga idol on 26 October. We found this viral video uploaded by the ABP News on its YouTube channel with description, “…visuals from Bihar’s Munger where police lathi-charged people sitting near Durga idol.”

We contacted Dilip Kumar Shukla, journalist in Dainik Jagran to verify the claim. “This video is of an incident happened on 26 October. People held protests in Munger against police violence,” said Shukla.

An article published in Dainik Jagran on 29 October states, “The mob ransacked the police station to protest against the immersion incident in Munger…The administration removed the District Magistrate and and Reserve Superintendent of Munger.”

According to another news report, an FIR has been lodged against the policemen who lathi-charged during the Durga idol immersion in Munger.

A report published in the Dainik Jagran stated that villagers have appealed for CBI inquiry into the incident.

Social scanning of the user who shared the viral video revealed that he is a resident of Kolkata in West Bengal.

Conclusion: The video of lathi charge during Durga idol immersion in Bihar’s Munger district is viral with false claim as from West Bengal.