Conclusion: The video is of 2017 when a protest was carried out by locals in Goalpara district of Assam against alleged harassment of Muslims. They were not demanding a separate country. 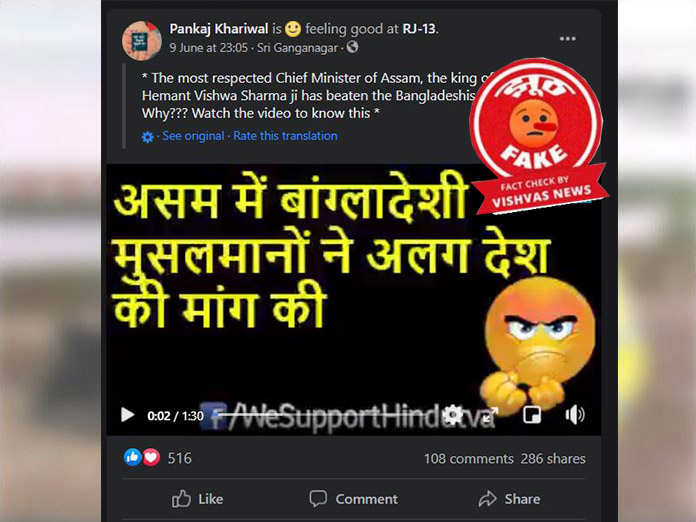 Vishvas News (Guwahati): In a viral video, policemen could be seen baton-charging a group of protesters. Users are claiming that these protesters were Bangladeshi Muslims living in Assam and they were demanding a separate country. We found in our investigation that the claim is false. This video is not recent. The video is of 2017 when a protest was carried out by locals in Goalpara district of Assam against alleged harassment of Muslims. They were not demanding a separate country.

When the video starts, the text on the video reads “translated: ‘Bangladeshi Muslims’ are demanding separate country.”

The archive version of this post can be viewed by clicking here.

Vishvas News first put the viral video on InVID tool and took out its key-frames. We then reverse images searched these key-frames. We found the clippings of this same video in a Facebook post. A user named Hussain Ahmed Madani had also posted this video in his Facebook timeline in 2017 with the caption “Heated conditions in Kharbuja of Gopalpara district. One person was killed and another was injured in a gunfight between the protesters and the police.” This gave us a clue that the video could be from 2017.

We further search these screenshots with appropriate keywords. We found this video on a youtube channel uploaded in 2017. The caption read “Fascist brutality and oppression by Assam police on the Minorities: It has become a common practice by the incumbent Assam govt. to unleash a reign of terror on the people who comes out in protest demanding their democratic rights and legitimate justice. This time it is in Kharbuja, Goalpara district, ASSAM, INDIA when police resorted to lathi-charge and indiscriminately fire on a peaceful protest by citizen who were demanding lifting of ‘doubtful citizen and voters tag’ imposed by the govt.”

In this video, the banner that the protesters are holding could be seen more clearly. The text written on the banner reads “37 no. National Highway Blocking Programme, on the demands of : Permanent solution of ‘D’ voters, NRC without excluding real citizens, stopping the process of declaring 40,000 people as ‘D’ voters and provide jobs in proportion to population”

We contacted Rajib Agasty, Senior Journalist & Lower Assam Bureau head of Earshot Media regarding the matter. He told us that “This incident happened in front of Naranarayan Setu Outpost at Goalpara back in 2017, which is going viral now. This was a protest demanding D Voters & NRC related issues. Nothing with separate country & Bangladeshis. The claim going viral is fake.”

Vishvas News scanned the profile of Facebook user Pankaj Kariwal. The user is followed by 201 people and has 988 friends. The user is a resident of Sri Ganganagar.

Conclusion: Conclusion: The video is of 2017 when a protest was carried out by locals in Goalpara district of Assam against alleged harassment of Muslims. They were not demanding a separate country.