Fact Check: Viral post about Reliance and WhatsApp is fake 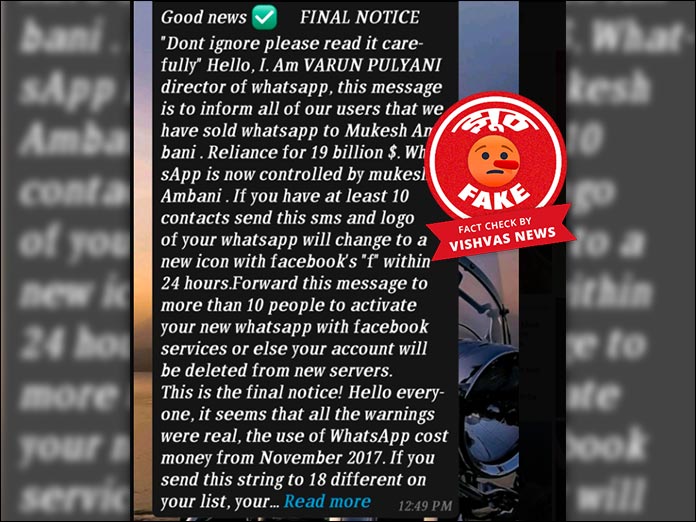 Vishvas News received this claim for fact check on its Fact Checking WhatsApp chatbot (+91 95992 99372). Vishvas news investigation revealed that the viral message shared in Mukesh Ambani’s name is fake. Reliance has not bought WhatsApp. The company’s spokesperson denied the claims made in the viral post.

The viral message shared on Whats app reads, “Good news FINAL NOTICE. Dont ignore please read it carefully” Hello, I. Am VARUN PULYANI director of whatsapp, this message is to inform all of our users that we have sold whatsapp to Mukesh Ambani. Reliance for 19 billion $…”

The following two claims are made roughly in this post:
1) Varun Pulani is the director of WhatsApp.
2) Whatsapp has been sold to Mukesh Ambani.

We searched on Google to know who currently owned WhatsApp. We found that Facebook owns WhatsApp.

According to the WhatsApp’s website, WhatsApp founder Brian Acton and co-founder Jan Koum sold WhatsApp to Facebook in 2014 for $ 19 bn.

Vishvas News contacted Reliance spokesperson to verify the claim. “This message is fake. Reliance has not bought WhatsApp, ” he said.

On searching, we found that this fake claim has been shared on social media since 2014 and goes viral from time to time.

Conclusion: The viral message is fake. Reliance has not bought WhatsApp.