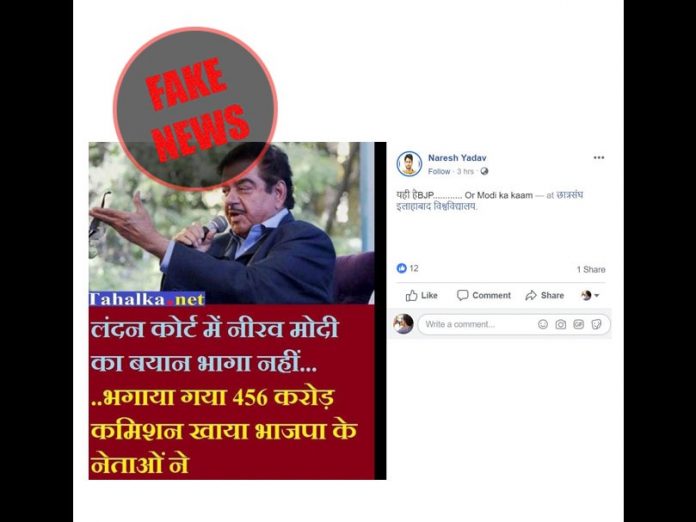 A photo is doing rounds on social media claiming that the fugitive billionaire Nirav Modi, at a London court, stated that he did not flee, but was asked to escape by BJP leaders who took a commission from him.

Claim: A user Naresh Yadav shared an image on Facebook with a caption that says, “Nirav Modi made a statement in London that he didn’t run away from India on his own, but was helped to escape. BJP leaders took a commission of Rs 456 crore for this.”

The fact check revealed that the post with the viral claim of Nirav Modi’s statement is fake. Nirav Modi did not give any such statement so far.

We used Stalkscan to check the Facebook profile of the user Naresh Yadav, who posted the image. Upon verification we found there were multiple fake posts from the same user.

To find the truth behind the claim we searched the statement on the internet. We found various posts viral with the same claim. Upon further investigation, we found that a version of this claim went viral as a photoshopped tweet from News18 India.

We searched the claim on News18 India Twitter handle and landed up to the original tweet of News18 India.

This original tweet has been doctored by some miscreants and was later made viral.

We reached out to Sanjay Ram (PR of Shatrughan Sinha). He refused to share any information regarding the same.

We did not find any connection of the photo with the caption.

As per Reuters, Nirav Modi appeared in the court and spoke only to confirm his name, age and address, and that he did not agree to being extradited.

Knowing the truth is your right. If you have a doubt on any news that could impact you, society or the nation, let us know. You can share your doubts and send you news for fact verification on our mail ID contact@vishvasnews.com or WhatsApp us on 9205270923.