The claim of renaming Mughal Gardens of Rashtrapati Bhavan as ‘Ashok Vatika’ is fake. Earlier, the rumor of Mughal Garden being renamed Rajendra Prasad Garden has gone viral, which was proved wrong in Vishwas News investigation. 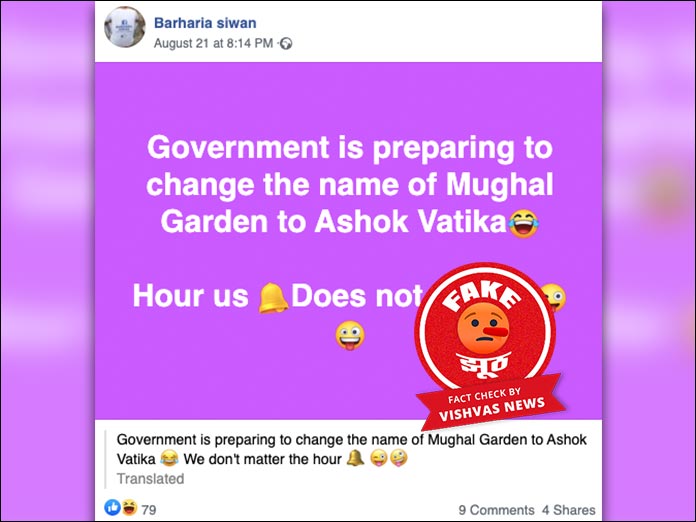 New Delhi (Vishvas News). Several viral posts on social media spread rumours about the government’s decision to rename Mughal Garden in the premises of Rashtrapati Bhavan over the last few days. It is claimed that the Mughal Gardens are set to be renamed as ‘Ashok Vatika’.

Vishvas news investigation revealed the claim to be fake and similar claims like renaming as ‘Rajendra Prasad Garden’ was over the Internet even in the past.

Facebook user ‘Barharia Siwan’ wrote, “The government is preparing to change the name of Mughal Garden to Ashok Vatika. We do not mind the hour.”

Many other users have shared these photos with similar claims. See the archive link for the post here.

The Mughal Gardens in the premises of Rashtrapati Bhavan have historical significance. The change in its name will be big news in itself. But we did not find any such information in the news search.

Searching with other keywords, we found a link to some old news, according to which the All India Hindu Mahasabha demanded the renaming of the Mughal Gardens at Rashtrapati Bhavan to ‘Rajendra Prasad Garden’. According to the news published on 20 August 2017 on the NBT website , the Hindu Mahasabha had also written a letter to President Ramnath Kovind and Prime Minister Narendra Modi with this demand.

Disclaimer: The article has been modified by removing some details which were not required or were irrelevant to the article. The process of updating the story is according to the SOP and there is no change in the conclusion.

Conclusion: The claim of renaming Mughal Gardens of Rashtrapati Bhavan as ‘Ashok Vatika’ is fake. Earlier, the rumor of Mughal Garden being renamed Rajendra Prasad Garden has gone viral, which was proved wrong in Vishwas News investigation.