The video related to Ganesh Chaturthi festival in Lal Darwaza area of ​​Hyderabad is going viral with a communal claim. In the video, all the people involved in the crowd are believers of the same religion and relatives among themselves. This claim is false that Muslims opposed the installation of Lord Ganesh’s statue. 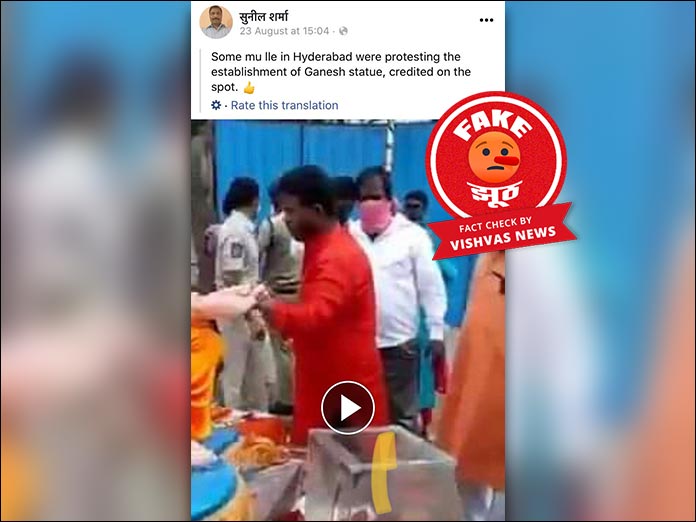 New Delhi (Vishvas News). A video of a group of people quarrelling with Lord Ganesh statue behind has given rise to communal claims on social media. It is being claimed that some Muslims were opposing Ganesh festival in Hyderabad and people thrashed them on the spot.

This claim turned out to be fake in Vishvas News investigation. The incident in Hyderabad was a clash between relatives. No person of any other religion was involved in this incident of assault.

Sharing the viral video (archive link), Facebook user ‘Sunil Sharma’ wrote, ” Some Muslims were opposing Ganesha idol festival in Hyderabad and were thrashed on the spot.”

The one minute and nine seconds video is viral where some policemen can also be seen in the mob. In the video, a car can be seen in a frame of 32 seconds with the number plate reading ‘AP12 L 9909’. It raised doubts about the location of the incident as it can relate to Andhra Pradesh, Telangana and Hyderabad.

On searching the news with key-words, we found a report published on thenewsminute.com website on August 23, which used the grab of the viral video.

According to the report, the video is related to the Lal Darwaza area of ​​Hyderabad, in which a dispute erupted between members of a family over the installation of Ganesha’s statue. All those involved in the incident were of the same religion.

DCP B Srinivasa Reddy said, “This incident happened on 21 August and is spread in a wrong context. Lord Ganesh statue was about to be installed on the road that interrupted an ambulance, going to the village. The sarpanch of the village urged the local police to remove the statue… There was a dispute about this.”

The report had also quoted ACP MA Rashid who had clarified that there is no notice of communal tension anywhere during Ganesh Chaturthi festival in their area.

As Lal Darwaza area falls under the Mughalpura jurisdiction, Vishwas News contacted Station House Officer A Ravi Kumar to confirm the matter, but we could not talk to him.

We connected to Additional Inspector Ranjit Kumar Gaur to clarify the incident. “The video going viral is related to the incident in Lal Darwaja area, but it has no communal aspect. None of the people involved in the assault was related to other religions, rather all were believers and relatives of the same religion,” said Gaur.

More than two thousand people follow this Facebook user who shared the video with a communal claim. This profile has been active on Facebook since 2011 and is operated from Delhi.

Conclusion: The video related to Ganesh Chaturthi festival in Lal Darwaza area of ​​Hyderabad is going viral with a communal claim. In the video, all the people involved in the crowd are believers of the same religion and relatives among themselves. This claim is false that Muslims opposed the installation of Lord Ganesh’s statue.