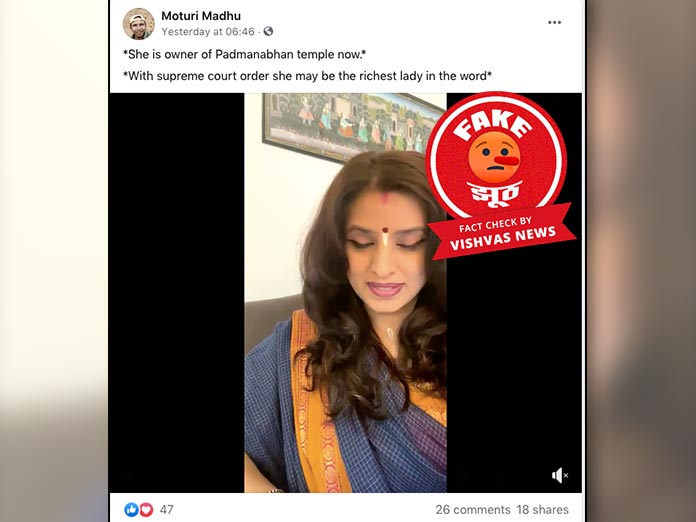 New Delhi. Vishvas News. A viral video on social media features a woman expressing gratitude over the success in Sree Padmanabhaswamy Temple case with a claim that she is the owner of the temple and maybe the richest lady in the world. We spotted the claim first on twitter. The video is viral on other social media platforms like YouTube and Facebook. Vishvas News investigation revealed the claim to be false and the temple’s ownership does not belong to anybody and would remain the public property. However, the Travancore Royal family has won the shebait rights of the temple.

A viral video on social media featuring a woman thanking advocates on the success of Sree Padmanabhaswamy Temple case comes with a claim that she is the owner of the temple and maybe the richest lady in the world. The archived post can be accessed here.

The video is also available on YouTube with false claims.

When we searched on the Internet, we found several news reports on the end of nine-year-old controversy over the administration and management of the historic temple.

The Supreme Court in its verdict on 13 July 2020 upheld the rights of Travancore Royal family in the administration of Sree Padmanabhaswamy Temple in Thiruvananthapuram, Kerala.

“The administrative and advisory committees shall do well to discharge all their functions including performance of the worship of the deity and maintenance of its properties, diligently and in the best interest of the temple, and provide adequate and requisite facilities to the worshippers and more..,” the Judgment stated in Page no. 214.

An article in the Indian Express stated, “The Supreme Court upheld the right of the Travancore royal family to manage the property of deity at Sree Padmanabha Swamy Temple… The court said that, as per customary law, the shebait rights (right to manage the financial affairs of the deity) survive with the members of the family even after the death of the last ruler.”

However, there was no information on the ownership of the temple as in the viral claim that had over 2,000 viewers.

When we contacted the Travancore family over the viral claim, they clarified to us that they don’t hold the ownership of the temple.

“The person in the video did not claim to be the owner and even we don’t hold the ownership of the temple. The temple is a public property and nobody can claim ownership. We are a part of the administration and the eldest male member of the family will perform the duties as directed by the Supreme Court,” said Travancore Prince Aditya Varma Thampuran.

We found the narrator in the video is Shilpa Nair, the president of the People of dharma, an organisation that gives legal support on temple related issues.

We accessed the original video that Nair posted on her twitter expressing gratitude to the SC, Justice UU Lalit and Indu Malhotra.

Nair herself had tweeted the screenshots of the false claims and objected to the descriptions that stated her as the ‘owner of the temple’. “I do not belong to the Travancore Royal family nor I am the owner of any temple wealth,” she said.

Our further investigations revealed that Nair had filed a police complaint against the false claims.

Conclusion: The viral video featuring a woman expressing gratitude over the success in Sree Padmanabhaswamy Temple case with a claim that she is the owner of the temple and maybe the richest lady in the world is fake.