Vishvas News in the fact check found that BEST has not started electric taxi service in Mumbai. Viral claim is fake. 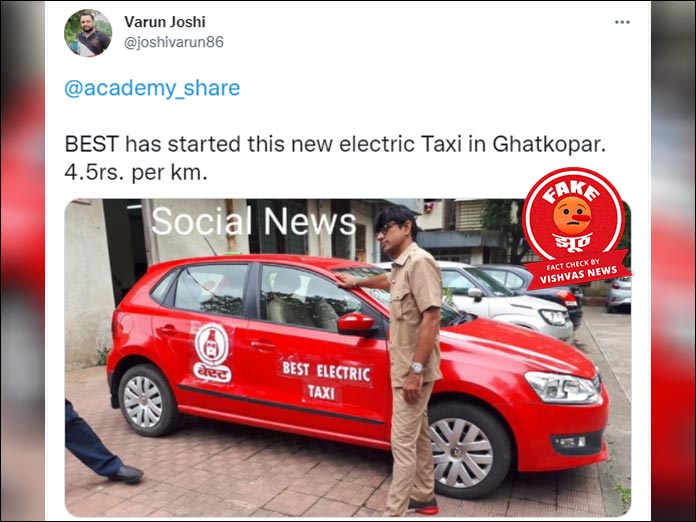 New Delhi (Vishvas News): Vishvas News came across a post, where a red car with the logo of BEST can be seen along with a person standing besides it. Users are claiming that BST started a new electric taxi for the ease of passengers. Vishvas News in its investigation found out that the claim about BST starting an electric car is fake. BST PRO Manoj Varade too denied the claims.

Vishvas News started its investigation with simple Google Reverse Image search to see if there are any news reports about the same.
If BST had started electric car services in Mumbai it would have been a big news and would have been covered by various media organisations.

We continued our search on social media and tumbled upon the Twitter handle of BEST Bus Transport, @myBESTBus.

A press note in Marathi was shared by the BEST Bus Transport.

The caption stated: Clarification : Regarding viral photo in circulation of an electric cab showing it as BEST vehicle #fakenews #bestupdates

The press note in Marathi said, “Since a few says a picture is being widely shared on the social media platforms, where a person is seen standing near a car that says it is BEST electric taxi service. This has created a confusion among the people including, passengers, journalists and Mumbaikars. We hence clarify that no such step is being taken. Neither we wish to introduce such service in future. Do not trust the claims on social media platform“.

Vishvas News in the next step of investigation contacted the BST PRO Manoj Varade, who informed that BEST has not started any taxi service. “In any city in the country, there is no taxi service by the municipal corporation. Hence it is also not true about Mumbai. The investigation about the picture is underway and we are also planning to register a case of cyber crime,” the PRO added.

Vishvas News then did a social background check on the user who shared the picture. We came to know that Bansilal Garud is a resident of Manmad, Mumbai. He has 4990 friends.

Conclusion: Vishvas News in the fact check found that BEST has not started electric taxi service in Mumbai. Viral claim is fake.