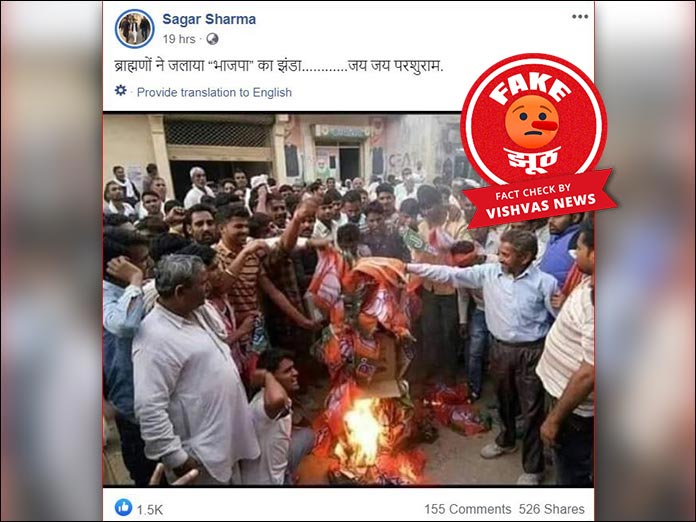 New Delhi (Vishvas News): Some pictures are going viral on social media in which people can be seen burning a BJP flag. It has been claimed that the public opposed the BJP after Amit Shah’s digital rally in Bihar. Some people are also claiming these people are opposing Brahmins.

Vishvas News investigated and found that viral post to be fake. We found that the viral pictures are old and are going viral as recent with false claims. The pictures are of incident that happened in 2018 in Rajasthan.

An image was uploaded on June 12, 2020 by a Twitter handle of a user named Siddharth Yadav claiming: “Opposing BJP by the people of Bihar after the digital rally of Hon’ble Home Minister Amit Shah ji in Bihar.”

Vishvas News had checked this post earlier as well. Earlier, the viral picture was posted claiming to be that from an incident that happened in Siwan.

When the picture was viral in the name of Bihar, we searched the source of the image. While observing the picture carefully, we saw a local BJP office in the picture. Apart from this, a poster of a leader could also be seen. The leader seen in the poster was wearing a Rajasthani turban. This gave us a clue that the picture may be from Rajasthan.

We further investigated by searching the image through Google reverse image tool. We found a link to the news report dated 20 November 2018 on a website. As per the report, hen Mukesh Goyal’s name appeared in Kotputli seat in BJP’s fifth list, Hansraj Patel filed his nomination as a rebel candidate. Patel’s supporters burnt party’s flag. The picture was taken at the same time. The pictures are now going viral.

Vishvas News spoke to BJP spokesperson of Bihar, Dr. Nikhil Anand. He said that no such incident was reported from anywhere in Bihar. The virtual rally received unprecedented support and people were excited to hear Amit Shah. Such elements promoting propaganda on social media should be stopped and if possible, action should also be taken.

We also spoke to Amit Alok, digital in-charge of Dainik Jagran, Bihar. He told us that no such incident has happened in Bihar. The picture is not from Bihar.

We scanned the profile of the Twitter user Siddharth Yadav who shared the viral post. We found that his handle was made in April 2020. 259 people followed the user.