Fact Check: Black mold on onions and inside refrigerators do not cause mucormycosis; viral post is fake

The black mold found on onions and the one that forms in the refrigerators are different from mucormycosis causing black fungus. The post going viral is fake. 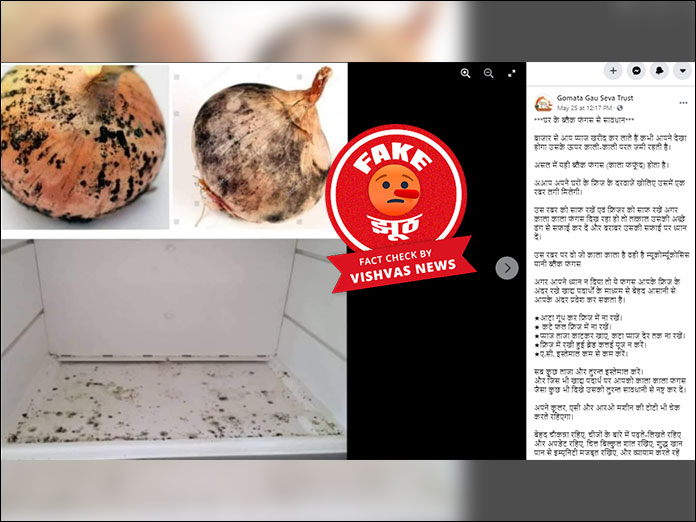 A post shared on Facebook by a page named Gomata Gau Seva Trust claims: “Beware while buying onions from the market and storing them in the refrigerator. The black grime or fungus often seen on the outer shell of the onions is toxic black fungus that causes mucormycosis.” The post further claims that if people are not too careful, the black mold can spread while cooking curries or stored in the refrigerator’s cool settings.

Vishvas News spoke to Prof. Amod Gupta, Emeritus Professor, Advanced Eye Centre, PGI, Chandigarh. Regarding black fungus, he explained: “The black colour is actually the devitilized tissue resulting from the fungal infection that invades the blood vessels and destroys them. In common man’s language, it is called black fungus as it produces tissue necrosis which is black in colour and due to this the tissue turns black in color, its technical name is ESCHAR- the dead necrotic tissue that can cause can affect the orbit of eyes, palate, sinus or skin.”

“If you have any form of immunocompromise, then you are at risk. When you are immunocompromised, your immune system’s defenses are low, affecting its ability to fight off infections and diseases. It includes diabetes mellitus, or some forms of cancer, or people who are on steroid therapy for any other problem. People with diabetes, those on steroids and humidified oxygen for a long time, and COVID patients with pre-existing comorbidities are the most at risk. Others include patients like those post chemotherapies, those on long-term immunosuppressive drugs,” he added.

Regarding the viral claim, Prof. Amod said: “This will be misleading to say that it spreads through onion molds or refrigerator linings. These claims create panic.”

We compared the studies on black mold on onions and in refrigerators with black fungus.

What is black mold on onions? Can you use onions with black mold?

According to the United States Department of Agriculture, black mold on onion is caused by aspergillus niger, a common fungus in the soil. To discourage mold growth, store onions in the refrigerator for up to two months. Rinse off small amounts of the black mold on the outer scales of the onion under cool, running tap water or cut off the affected layers. The unaffected part can be used. Persons known to be allergic to Aspergillus niger should not use onions with black mold.

According to Center for Disease Control & Prevention (CDC), Mucormycosis is a fungal infection caused by a group of molds called mucormycetes. These molds live throughout the environment. Mucormycosis mainly affects people who have health problems or take medicines that lower the body’s ability to fight germs and sickness. It most commonly affects the sinuses or the lungs after inhaling fungal spores from the air. It can also occur on the skin after a cut, burn, or other type of skin injury.

ICMR also defines Mucormycosis as is a fungal infection that mainly affects people who are on medication for other health problem that reduces their ability to fight environmental pathogens. The initial warning signs of the infection are pain or redness around the eyes or nose, fever, headache, coughing, shortness of breath, bloody vomits, and altered mental status.

What is Black Mold?

According to mold-advisor.com, mold can grow anywhere, indoors or outside, and is present everywhere. “Black mold” that is often seen in refrigerators if not cleaned well is stachybotrys chartarum.

What is is stachybotrys chartarum?

According to Centers for Disease Control & Prevention (CDC), Stachybotrys chartarum is a greenish-black mold. It can grow on material with a high cellulose content, such as fiberboard, gypsum board, and paper. Growth occurs when there is moisture from water damage, water leaks, condensation, water infiltration, or flooding. Constant moisture is required for its growth.

Why is There Black Mold in the Refrigerator?

Mold spreads through the air and through surface contact. The number one source of refrigerator mold is mold on food. Some types of food, such as cheese and hard salami, produce mold naturally and can still be eaten once the mold is cut away. These kinds of molds are less likely to spread to other foods and surfaces.

Vishvas News also spoke to Dr. Nikhil Modi of Indraprastha Apollo Hospital. He also confirmed that: “Black mold on onion is different from black fungus. But one should always clean foods before consuming.”

The post is shared on Facebook by a page named Gomata Gau Seva Trust. When we scanned the page we found that 5,215,291 people follow the page.

Conclusion: The black mold found on onions and the one that forms in the refrigerators are different from mucormycosis causing black fungus. The post going viral is fake.