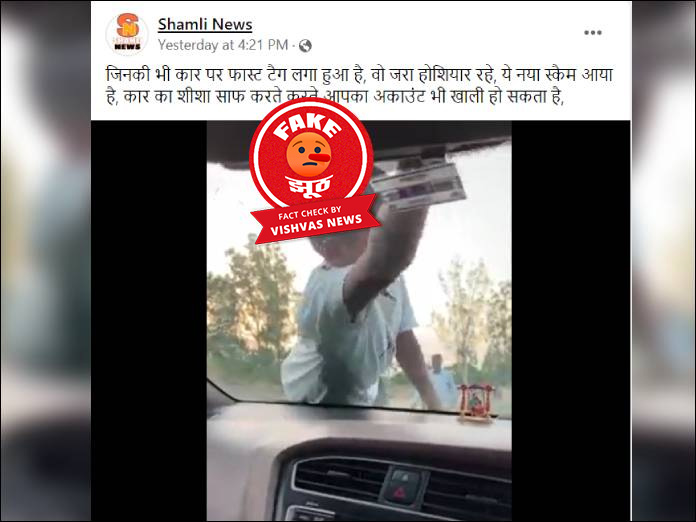 New Delhi (Vishvas News): A fake video is going viral on many websites and social media platforms, which shows a child scamming a passerby by moving his watch over the FASTag sticker while cleaning the car’s windscreen. The video is claimed to be a new type of scam. However, Vishvas News in its investigation, after checking the 3:45 minutes long video, found it to be fake.

Facebook page Shamli News uploaded a video on June 24, claiming: ‘Whoever has a FASTag on their car, be careful, this is a new scam, your account can also get empty while cleaning the windscreen.’

Vishvas News first crosschecked the viral video and found the child to be cleaning the windscreen. He can also be seen moving his watch over the FASTag. While scanning the video we found a notification which directed us towards the original video on Facebook page ‘Baklol Video‘. After thoroughly scanning the Facebook Page, no such video was found. On gathering information about this page from Google search, it was found that its founder is Pankaj Sharma. Based on the details, we started searching Pankaj Sharma’s Facebook page.

Continuing the investigation, Vishvas News contacted Pankaj Sharma, Founder, Baklol Video. He told us that the viral video was made for the purpose of awareness. It was a scripted video, but people found it misleading, so it has been removed from the page.

During the search, we found a tweet on the official Twitter handle of Paytm. In this the viral video was called fake. Paytm wrote in its clarification that a video is spreading misleading information about Paytm FASTag. NETC guidelines FASTag payments can be initiated only by authorised merchants, onboarded after several rounds of testing. Paytm Fastag is completely secure.

During investigation, we found a tweet on the Twitter handle of FASTag NETC, which describes the video going viral on social media as completely baseless and false.

Next, we also gathered information about the page which is making the fake post viral. The Facebook page Shamli News, followed by more than 17000 people, runs some local advertisements too.