Fact Check: Google has not yet opened its office in Pakistan; claim made in viral images is fake 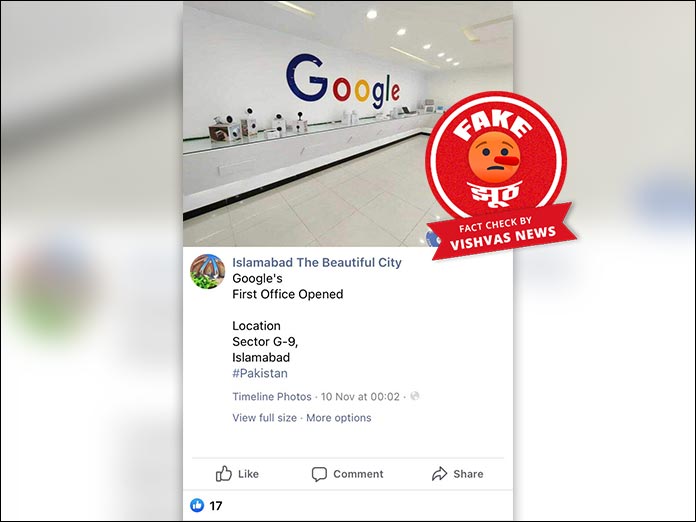 New Delhi (Vishvas News) A viral post along with two pictures allegedly of Google office is shared with a claim that Google has opened its first office in Pakistan, Lahore.

Vishvas News investigation revealed the claim is fake. Google Press Team refuted the claims. Pakistan Journalists confirmed to us that the images in the viral post are from Google’s store by a private reseller in Lahore, Pakistan.

We also found the image on Twitter with shared with caption, “Thanks to the personal efforts and best strategy of Prime Minister Imran Khan, Google has opened its first office in Pakistan which will benefit the economy to the tune of crore of rupees.”

Vishvas News searched on the Internet for news about Google opening its office in Paksitan. We found many news articles about Pakistan government’s decision that make it compulsory for social media companies to open offices the country.

According to an article published in the Times Of India on 2 March, “The recently-laid out rules by the government of Pakistan among other things make it compulsory for social media companies to open offices in Islamabad and build data servers to store information. They also set strict timelines for companies to take down content upon identification by the authorities…”

The article further stated that social media companies wrote a letter through a coalition called Asia Internet Coalition (AIC) that comprises Facebook, Google, to Pakistan prime minister Imran Khan warning suspension of operations in the country if the new rules are not revised.

However, we did not find any authentic news reports that confirmed about Google opening its office in Islamabad.

We searched on Google’s official website for their office locations. We did not find any address or details about the alleged Pakistan office here.

Vishvas News contacted Google Press Team via email for verification. Sharing to us an article by the Techjuice, Google’s Communication Manager refuted the claims.

We could confirm that the images shared along with post are from the Google store by SSZ Tech Pvt Ltd, a reseller of Google products in DHA Phase 1, Lahore and not Google’s new office.

In the next step of investigation, Jagran New Media’s Senior Editor Pratyush Ranjan contacted Naveed Akbar, senior reporter of AAJ News in Pakistan to check the authenticity of the claims in viral images. Akbar shared with him a quote from Pakistan Telecommunication Authority (PTA) Spokesperson Khurram Mehran saying the information about Google’s office is not yet confirmed.

We also found a video of Google’s store in Paskitan on Facebook.

Social scanning of the Facebook page that shared the viral claim revealed that it has 31,872 followers and is active since June 2016.

Conclusion: The viral post is fake. Google has not opened its first office in Pakistan. The pictures shared with the post are from Google’s store by SSZ Tech Pvt Ltd, an authorized reseller in Lahore.