In the investigation by Vishvas News, the image where a photographer can be seen clicking PM Modi’s photo lying on the ground was found to be edited. The viral image is fake. 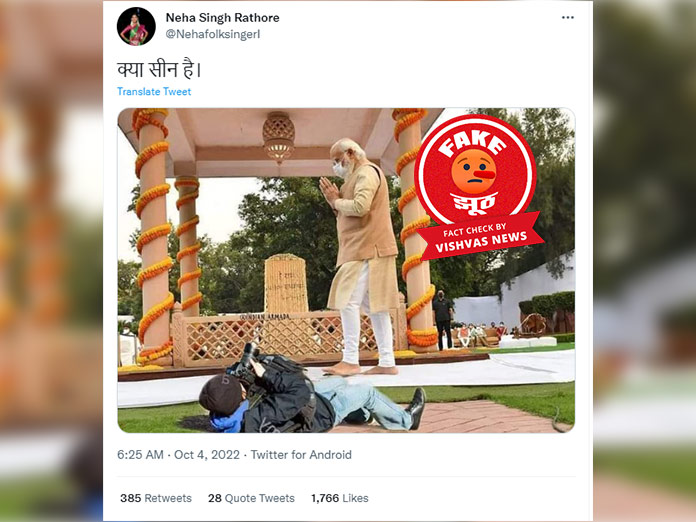 Vishvas News (New Delhi): Vishvas News came across a picture of Prime Minister Narendra Modi being widely shared on various platforms. In this picture a photographer could be seen lying on the ground clicking PM’s picture. Vishvas News in its investigation found the picture to be edited. It is a combination of two pictures.

Vishvas News started its research with a simple Google Reverse Image Search and this led us to a tweet by PM Narendra Modi from his official account made on 2nd Oct, 2021 from a prayer meeting at the Gandhi Smriti in Delhi.

The second picture in the tweet was the exact same picture that went viral. There was no photographer in this image.

We also found this picture of PM Modi on siasat.com the caption in the picture said: “New Delhi: Prime Minister Narendra Modi at the Gandhi Smriti in Delhi on the occasion of birth anniversary of Mahatma Gandhi. (PTI Photo)“

We then checked for the other picture, that is of the photographer.

We searched for this picture using the keyword search, since reverse image search did not pull many results.

We searched in the Google search engine with the keywords, ‘photographer capturing photo lying on ground‘.

We found this photographer’s picture on the stock images website, alamy. PM Modi was nowhere in this picture.

The picture here was contributed on 15 March, 2017. The caption mentioned, “Photographer lying on the ground while photographing a large building from different perspective. Creative photography style.“

The picture was contributed by one ‘Ingemar Magnusson‘. Vishvas News has also reached out to him through e-mail, but we have not yet received an answer.

In the next step of investigation we connected with a journalist from PTI working on the photo desk. He confirmed that the picture of Narendra Modi shared in 2021 was provided by PIB and released by PTI.

Vishvas News reached out to BJP Spokesperson Shivrai Kulkarni who said that this is an edited image of PM Narendra Modi and also claimed that this was an attempt on behalf of the opposition parties to malign his image.

Vishvas News has also reached out to PM office in this regard, the fact check will be updated on receiving a quote.

In the last step of investigation Vishvas News conducted a background check on the user who shared the viral image. Neha Singh Rathore has 19.7K followers on Twitter.

Conclusion: In the investigation by Vishvas News, the image where a photographer can be seen clicking PM Modi’s photo lying on the ground was found to be edited. The viral image is fake.