Fact Check: New York Times has not written this article on PM Modi, the newspaper’s fake clipping is being shared

Vishvas News found this claim to be fake in its investigation. Vishvas News investigated and found that neither The New York Times published the viral article nor its editor-in-chief is Joseph Hope. 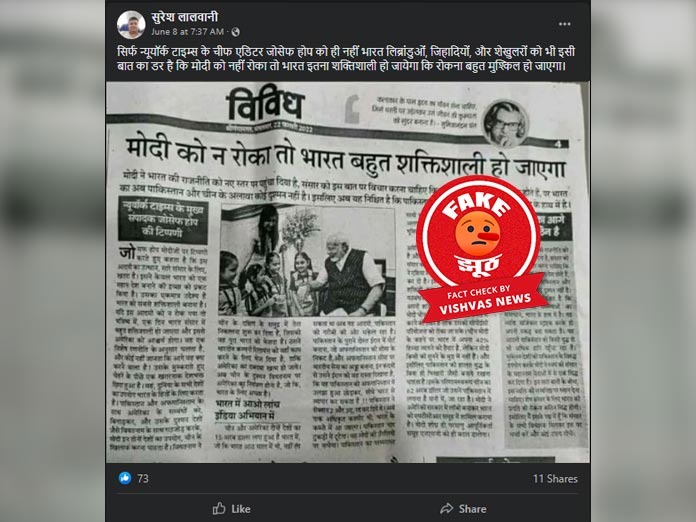 New Delhi (Vishvas News). A newspaper clipping is going viral on social media. The headline of the viral newspaper clipping is: Translated as “India will become very powerful if Modi is not stopped.” The article further claims that Joseph Hope, chief editor of the well-known US newspaper New York Times, has made the above remarks about PM Modi. Vishvas News found this claim to be fake in its investigation. Vishvas News investigated and found that neither The New York Times published the viral article nor its editor-in-chief is Joseph Hope.

Facebook user Suresh Lalwani shared the clipping of the newspaper on June 8 and wrote, “Not only Joseph Hope, Chief Editor of The New York Times, Bharat Librandus, Jihadis, and Shekhulars also fear the same thing if Modi is not stopped, India will become so powerful that it will be very difficult to stop.

Several other users on social media have shared the post with similar claims. The archived version of this post can be viewed here.

Taking the investigation further, we went through the search section of The New York Times, which had all the articles related to PM Narendra Modi. But we could not find the article which is being shared on social media.

We then went to the Our People section of the New York Times website. This section contains photos and details of all employees associated with the New York Times. Nowhere on the website we could find reporter or editor named Joseph Hope. We also searched the social media accounts of The New York Times, but we could not find any post related to the viral claim.

Vishvas News had earlier also investigated several such claims. You can read our earlier investigation here.

Vishvas News, in the last phase of the investigation, conducted a background check on the profile that shared the viral post. We found that the user is followed by 16,812 people.

Conclusion: Vishvas News found this claim to be fake in its investigation. Vishvas News investigated and found that neither The New York Times published the viral article nor its editor-in-chief is Joseph Hope.