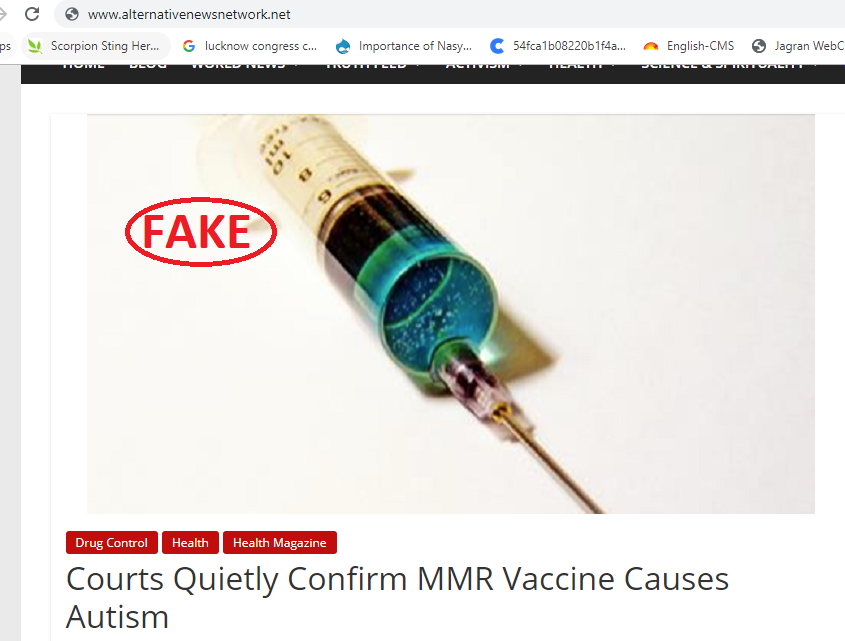 An article headlined ‘Courts quietly confirm MMR vaccine causes autism’ is getting viral across social media. The article reads that ‘Courts, governments and vaccine manufacturers have quietly conceded the fact that the Measles Mumps Rubella (MMR) vaccine most likely does cause autism and stomach diseases. Pharmaceutical companies have even gone so far as to pay out massive monetary awards, totaling in the millions, to the victims in an attempt to compensate them for damages and to buy their silence.’ The article also mentions about Dr. Andrew Wakefield, who first publicized the link between stomach disorders and autism, as mentioned in the article. Vishvas News team investigated the matter and found that the post is misleading.

The article shared on alternativenewsnetwork explains two cases dating back to December 2012. The first case was that of Ryan Mojabi, whose parents described how ‘MMR vaccinations caused a ‘severe and debilitating injury to his brain, diagnosed as Autism Spectrum Disorder (‘ASD’).’ The second case described in the article is that of a girl named Emily who won compensation following vaccine-related brain injury that, once again, involved MMR and resulted in autism.

The article describes the case of Ryan Mojabi, whose parents described how ‘MMR vaccinations’ caused a ‘severe and debilitating injury to his brain, diagnosed as Autism Spectrum Disorder (‘ASD’).’

We investigated and found that, as per the official website of U.S. Court of Federal Claims, Ryan suffered a Table injury under the Vaccine Act – namely, an encephalitis within five to fifteen days following receipt of the December 19, 2003 MMR vaccine.

Also, the court found no link between autism and vaccination.

The article further mentions about another case of a girl named Emily Moller. The article states that the girl won compensation following vaccine-related brain injury that, once again, involved MMR and resulted in autism.

However, the author of the article states, “HHS (US Department of Health and Human Services) says it “has never concluded in any case that autism was caused by vaccination,” it is still underwriting autism treatments such as ABA for children in its vaccine-injury program.”

We searched the ruling on the official website of the US Court. Emily’s court case does not mention the words ‘MMR’ or ‘autism’. It actually says her mother, Jillian, claims she suffered brain inflammation after receiving a diphtheria, tetanus and a cellular pertussis (DTaP) vaccination.

The ruling refers to Jillian Lowrie rather than ‘Jillian Moller’ as mentioned in the link in the Huffpost article.

We searched the claim on Google and found a report that states: In his paper published in The Lancet, Dr Wakefield claimed there is a link between the MMR vaccine and autism or bowel disease. But Andrew Wakefield’s work has since been completely discredited and he has been struck off as a doctor in the UK.

We searched the study of Dr. Wakefield on The Lancet and found that the study had been RETRACTED.

On a medical journal we found a report that states: Wakefield’s article linking MMR vaccine and autism was fraudulent.

We also visited the website of WHO and found that there is no evidence that exists of a casual association between MMR vaccine and autism or autistic disorders.

We contacted Dr. Praful Bharadwaj, Health Officer, UNICEF and he quoted: We have been running MR Campaign in all over India including UP and have vaccinated more than 7.57 crore children in UP alone with MR vaccine. All vaccines under the Universal Immunization Program in the country gets approval from National Technical Advisory Group on Immunization (NTAGI) and are safe to be used. Because of MR vaccine, the AEFIs ( Adverse Events Following Immunization) are minimal and no case of autism or deaths have been reported so far.