Fact Check: No, These Aren’t Fake Eggs From China, These Are Prank Slime Toys 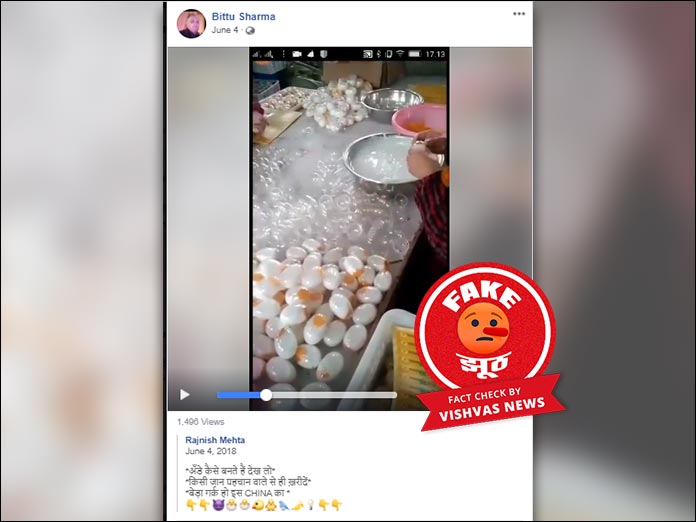 New Delhi (Vishvas News): A video going viral on social media claims that fake eggs are being manufactured and are sold and people should be cautioned while purchasing eggs. The video shows some persons filling a white substance in egg-shaped moulds. As per the claim, the fake eggs shown in the video are manufactured in China. Vishvas News investigated and found the viral claim to be false. The video actually shows the prank slime toys in the shape of eggs.

The video shared on Facebook by a user named Bittu Sharma shows some individuals filling white substance in egg-shaped moulds. As per the claim, the fake eggs shown in the video are manufactured in China so people should beware of buying eggs. The archived version of the post can be checked here. Vishvas News also received this story for fact check on its Whatsapp Chatbot.

We started our investigation by inserting the video link on InVid tool and extracting some screengrabs. When we performed Google reverse Image Search of the screengrabs we found that the video is in circulation since 2017.

We further investigated by using the magnifier tool and found that there is a label in some of the shells. The label belongs to a Korean company that sells slime on different online shopping sites. It is a lifelike appearance of a poached egg but it is a prank toy which is not edible.

We also looked out to the official notifications released by the Food Safety and Standards Authority of India (FSSAI). They’ve rubbished the claim regarding fake eggs. As per FSSAI, “There is no technology or chemicals available to complete the manufacturing of whole eggs. Also, it is not an economically viable process since normal eggs are available in abundance & at an affordable price.”

FSSAI has also released a notification regarding “egg safety guidance” and has debunked the same video which is going viral.

Vishvas News spoke to Dr. A.C. Mishra, Joint Director (Standards) at FSSAI. He said: “This is a fake video circulating since many years. A thick eggshell membrane indicates the freshness of the eggs. When the egg is fresh, there is not enough time for evaporation to separate the 2 membranes (outer and inner layers) causing it to stick to each other. This makes it look thicker and stronger when it is peeled. Also, the inner shell membrane of the eggs may become harder & elastic when it is older than 15 days, which is a natural ageing process. The viral video is fake and there is not technology that manufactures natural whole eggs.”

The post is shared on Facebook by a user named Bittu Sharma. When we scanned the profile of the user we found that the user is based out of Agra, Uttar Pradesh.

Conclusion: No, these aren’t fake eggs from China. These are prank toys that are not edible.