The post claiming WHO issued 7 brain damaging habits is falsely attributed to the organization. While the seven habits mentioned in the viral post do not directly lead to brain damage, however, it can cause serious health complications when done in excess. 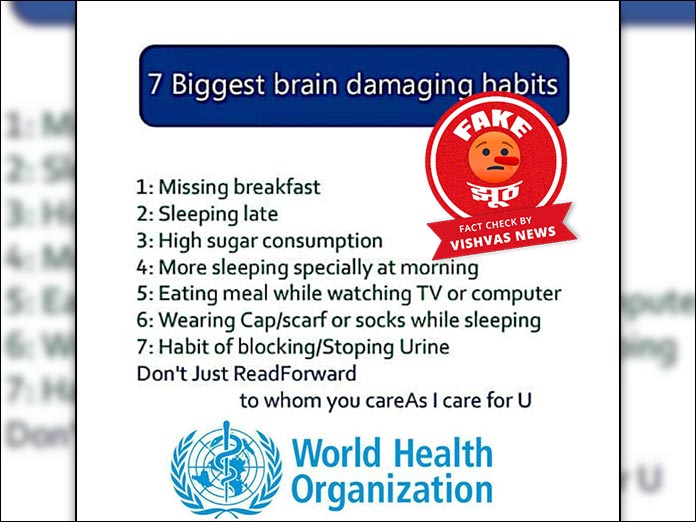 An image is going viral on social media claiming that World Health Organization (WHO) has laid down 7 biggest brain damaging habits. These include missing breakfast, sleeping late, high sugar consumption, more sleeping especially in the morning, eating meals while watching TV or computer, wearing a cap/scarf or socks while sleeping, the habit of blocking/stopping urine.

When we conducted a preliminary check we found that the viral claim is filled with grammatical and syntax errors.

In the end, the post reads: “Don’t Just ReadForward to whom you care As I care for U”. The word ‘you’ has been represented as “u”. Also, there is a spacing issue between some words omitted.

Therefore, it seems unlikely that World Health Organization would issue public information in this pattern.

Vishvas News contacted WHO and spoke to the Technical Officer, WHO Health Emergencies. As per her, the viral list has not been shared by WHO and has been falsely attributed to the organization.

When we searched the claim on the internet we found that the claim also went viral on social media in 2017 without WHO’s logo and was attributed to some other organization.

Let us go through the claims one by one

According to a report published on the website of National Institute of Health (NIH), there is no direct relation between missing breakfast and brain damage. But, missing breakfast may lead to the up-regulation of appetite and as a consequence, there may be weight gain over time that may lead to certain health issues. These reports can be read here and here.

According to a report published by Harvard Medical School, both too much sleep and too little sleep aren’t good as they may lead to memory issues. A person should get a minimum of seven hours of sleep on average.

According to WHO, 25 grams of sugar per day is required to intake in the diet. Too much sugar may lead to certain health issues, as per studies.

4. More sleeping especially in the morning

According to National Library of Medicine, power naps of 10 to 15 minutes have proven to boost the productivity and mood of an individual. However, there is no study that suggests that sleeping in the morning damages brain. Sleeping during the daytime may lead to a lack of proper sleep for some people at the night. And as a consequence, when one does not sleep at night, the body is deprived of its natural healing.

As per a report by Harvard Medical School, when you get distracted while eating, it can lead to eating more, and sometimes the food is not savoured while eating. However, there is no relation between brain damage and distracted eating.

6. Wearing a cap/ socks while sleeping

As per a study, warming feet using socks while sleeping improves the quality of sleep by accelerating sleep initiation and relaxing the body particularly in cooler countries. However, in tropical countries, sleeping with socks on will lead to an increase in body temperature.

According to doctors, holding urine for too long can weaken the bladder muscles over time that may lead to further health issues.

While the seven habits mentioned in the viral post do not directly lead to brain damage, however, it can cause serious health complications when done in excess.

The post is shared on Facebook by a page named Life Decoram. When Vishvas News investigated we found that the user has 286 followers till today.

Conclusion: The post claiming WHO issued 7 brain damaging habits is falsely attributed to the organization. While the seven habits mentioned in the viral post do not directly lead to brain damage, however, it can cause serious health complications when done in excess.