Fact-check: This is not a picture of current farmers protest, old picture from Meerut goes viral 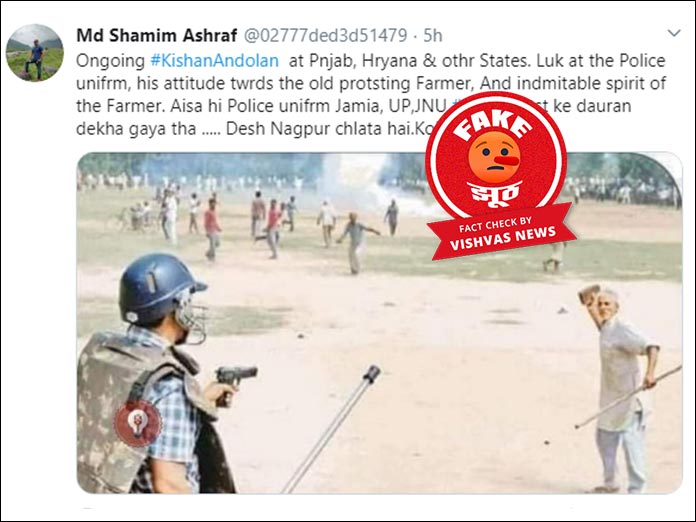 New Delhi (Vishvas News): On Sunday, Rajya Sabha passed two of the three farm reforms Bills that have seen widespread protests in recent weeks, particularly in Haryana and Punjab. The two bills, Farmer’s Produce Trade and Commerce (Promotion and Facilitation) Bill, 2020 and the Farmers (Empowerment and Protection) Agreement of Price Assurance and Farm Services Bill, 2020 were passed. After the same, an image of a security officer pointing a gun towards an elderly person was widely shared on social media claiming it to be from the recent farmer protests, however in its investigation Vishvas News found that this was an old picture form Khera, Meerut clicked in 2013.

Check out the archive version of the post here.

Investigation:
After Rajya Sabha passed the farm reforms Bill, the country has seen protests from farmers especially in the states of Haryana and Punjab. Since then a picture is being shared widely over social media platforms, claiming to be from the recent farmers protest.

Vishvas News first did a reverse image search on the image.
The reverse image search was done using the search engine ‘Bing’.
Vishvas News found the image on the website of ‘the pioneer‘. The picture was carried along with the report, ‘Meerut erupts in protest against NSA slap on Som’, the report was filed from Lucknow dateline on 30 September, 2013.

Vishvas News also found the same image on ‘The Indian Express’ website. The report ‘Tense Meerut erupts, six hurt in clash with police at banned mahapanchayat’, was filed on 30 September 2013. The report contains the widely shared image. The caption, ‘A security officer takes on a villager during the clash in Khera on Sunday. PTI’ suggested that it was a PTI photo.

The pradhan of Khera (Kheda) village Ombeer Singh, while interacting with Vishvas News said, “This is a picture clicked during the panchayat and was clicked in the year 2013 after Kawal Kand in Khera village. People from Saharanpur too visited the panchayat. The police did not permit to hold the panchayat and hence there was a clash in two groups.”

Dainik Jagran chief reporter of Meerut, Ravi Prakash Tiwari while interacting with Vishvas News said that the picture indeed is from 2013 and belongs to Sadar tehsil of Meerut, Khera village. He also added that people of the village wanted to hold a Panchayat but they were denied the permission by the administration, however they still held the panchayat and this led to a clash with the police.

Vishvas News did a social background check of the Twitter user who shared the picture with the false claim. User Md Shamim Ashraf joined Twitter on December 2014, and is following 73 people while has 11 followers. He has mentioned in his bio that he is a social activist.

Conclusion: The picture being shared claiming to be from recent farmers’ protest is old and was clicked in Khera, Meerut in the year 2013.