Fact Check: Old Survey of 2018 Passed Off As Recent; Viral Post is Fake 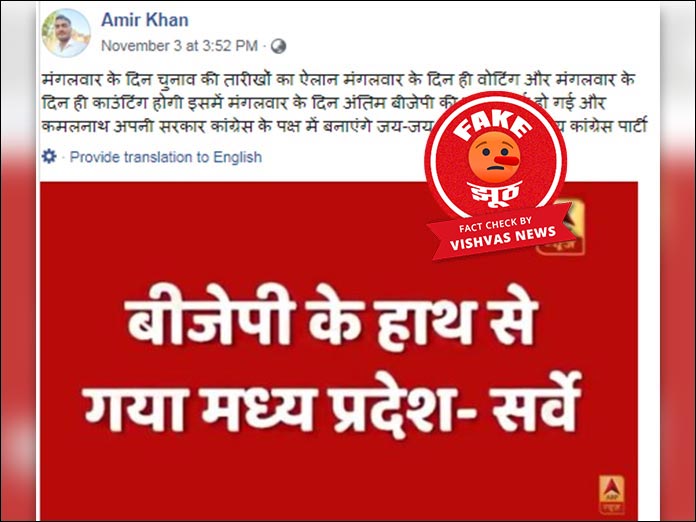 New Delhi (Vishvas News): A post going viral on social media amidst the results of Madhya Pradesh by-elections. The post attributed to the media house ABP News claims that Madhya Pradesh has slipped out of BJP’s hand.

The archived version of the viral post can be viewed by clicking here.

Vishvas News started its investigation by searching the Internet using appropriate keywords. We found the original video uploaded on December 7, 2018 on the ABP News YouTube channel.

During the 2018 Madhya Pradesh assembly elections, ABP News did an exit poll. A picture of the same exit poll is now going viral as recent. The video showed the same image after 2:50 minutes as shown in the viral post.

Apart from this, we did not find any such news in Google search.

Vishvas News spoke to the senior editor of ABP News. He said that the post is fake. The survey of the 2018 assembly elections is now going viral as recent.

Vishvas News scanned the profile of the user who shared the viral post. According to the information shared on the profile, the user hails from Shivpuri, Madhya Pradesh.

Conclusion: The image of ABP News’s old survey is going viral as recent linking it to the by-election in Madhya Pradesh. The viral post is post.