Fact Check: Post claiming that an image created by a Japanese Neurologist determines the state of mind is fake 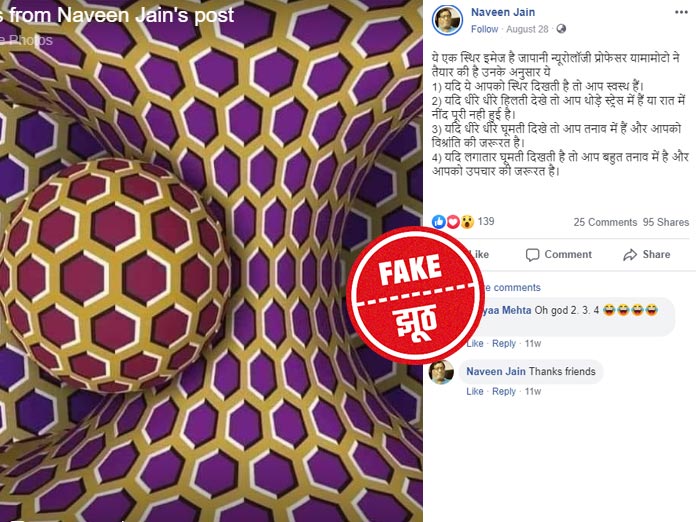 Vishvas News started its investigation by searching about the viral claim on social media. The post has been shared by many users on Facebook.

We performed Google reverse image search of the viral photo and found the same photo on Shutterstock, a stock photography company.

The image in the Shutterstock was posted under the account named “Guten Tag Vector”.

Using Twitter Advanced Search, we found the name of the user and his background. The user was Yurii Perepadia.

Vishvas News searched his profile on Facebook as well.

Through Facebook Messenger, we contacted him and asked about the viral image. He said he is the creator of the image shown in the viral post. He created the image in 2016.

So, it was clear that the viral image of illusion was created by Yurii Perepadia, who is a graphic designer from Ukraine and not by any Japanese Neurologist.

The viral post also claimed that the illusion shown in the viral image determines the state of mind.

Vishvas News spoke to Dr. Esha Mehta, who is a Psychologist. She said: “Illusions are meant to trick people. This image has nothing to do with the state of mind or to determine the stress levels. The claim is completely false.”

The post claiming that the image created by a Japanese neurologist checks a person’s level of stress is fake. The post is actually created by Yurii Perepadia, who is a graphic designer from Ukraine. And, it does not determine the state of mind or levels of stress.