Conclusion – According to Vishvas News investigation, the post that went viral in the name of Assam police is fake. In fact, the weapons seen in the film are said to have been left behind by Assam Police but in fact, it is the weapons recovered in a Myanmar operation. 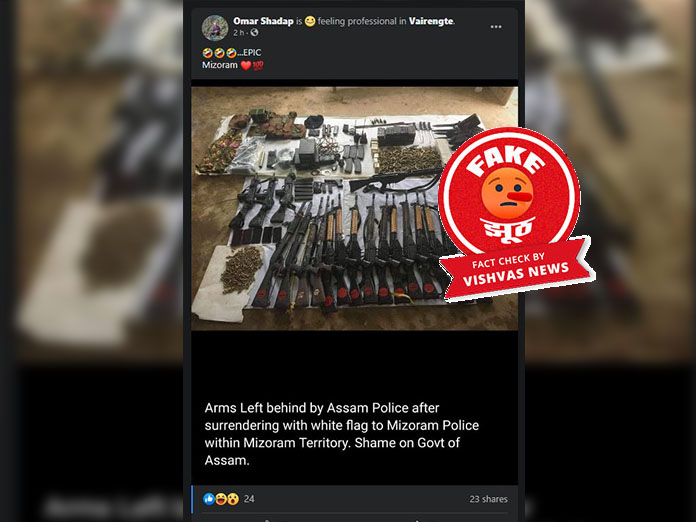 Vishvas News (Guwahati)। Amid reported clashes between police of Assam and Mizoram at state border, some people are sharing a photo of weapons on social media. The post is claiming that Assam police abandoned these arms and fled the border. In our investigation, we found that both these claims are fake. We found that the viral photo is from Myanmar.

Facebook user Omar Shadap uploaded this photo on July 27 claiming: ‘Arms left behind by Assam Police after surrendering with White Flag to Mizoram Police within Mizoram Territory. Shame on Govt of Assam.’

The archive version of Facebook post can be viewed here. Many user have sharing this picture as it is true.

Vishwas News first started searching for viral images through the Google Reverse Image tool. We found this picture on a website called www.myanmar-now.org. The viral photo was included in a report published in Burmese and English on this website on July 26, 2021. The report mentions in English – The captain, armed with 22 guns, surrendered during the capture of the military council camp.

The news can be read in both the languages in the link below.

Vishvas News took forward its investigation and shared the viral claim with journalist Nilotpal Timsina, who is covering the Assam-Mizoram border problem on behalf of East Mojo. He denied the viral claim and said Assam Police would not use such weapons. Meanwhile, five Assam police personnel were killed and many others injured during clashes between Assam Police and Mizoram Police on 27th July, but Assam Police did not surrender like this. However Assam Police moved out of the border following the Home Ministry’s order. So this viral post is completely fake.

Conclusion: Conclusion – According to Vishvas News investigation, the post that went viral in the name of Assam police is fake. In fact, the weapons seen in the film are said to have been left behind by Assam Police but in fact, it is the weapons recovered in a Myanmar operation.