Fact-check: No, Supreme Court did not change its motto, viral claim is false 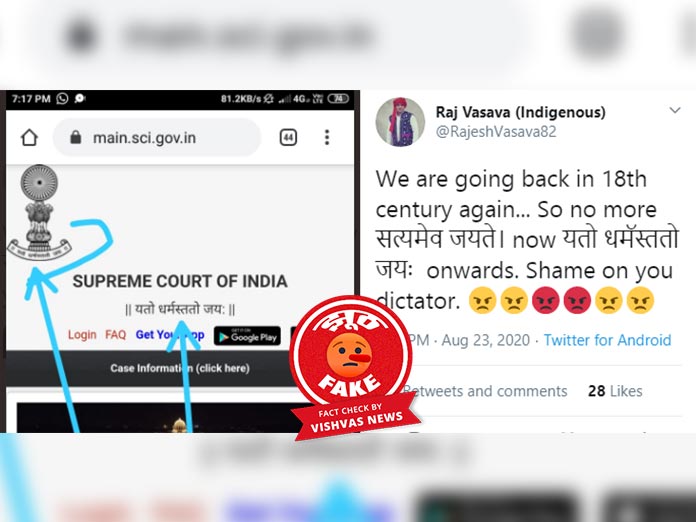 New Delhi (Vishvas News): Since a few days, a claim is being widely shared on various social networking websites,. The claim says that the motto of Supreme Court has been changed from Satyamev Jayate to ‘यतो धर्मस्ततो जय:’ (Yato Dharmostato jayah). Vishvas News in its investigation found the claims to be false.

Raj Vasava (indegenous) posted on his Twitter profile, “We are going back in 18th century again… So no more सत्यमेव जयते। now यतो धमॅस्ततो जयः onwards. Shame on you dictator.”
He shared the above content with a screenshot of the homepage of website of Supreme Court of India.

In the first step of the investigation, Vishvas News just used the keywords, “यतो धर्मस्ततो जय:” and searched it on the internet. The first page of search results said that यतो धर्मस्ततो जय is the motto of Supreme Court of India.
Which means, where there is righteousness (dharma), there is victory (jayah)

Vishvas News was thus sure that ‘यतो धर्मस्ततो जय:’ is the motto of Supreme Court of India.

Later, we checked for any news reports, which said that the motto of the Supreme Court of India has been changed, however no such reports were found.

Later, Vishvas News checked the website of the Supreme Court of India, where one can easily see the motto, right at the bottom of the headline.

On its Home page, one can see the option of ‘Museum‘ on the left side of the website. The section gives the complete information of the Supreme Court of India.
One document that deals with the ‘history of Supreme Court of India’, says;
DHARMA CHAKRA LOGO OF THE SUPREME COURT: Its design is reproduced from the wheel that appears on the abacus of the
Sarnath Lion capital of Ashoka with 32 spokes. The inscription in Sanskrit “yatodharmastato jayah” means – Truth alone I uphold. It is also referred to – as the wheel of righteousness, encompassing truth, goodness and equity.

Another document about the history of Supreme Court of India stated,”The ground floor Gallery traces the history of Indian legal system from ancient period to British time. It depicts Indian legal system through various periods with the help of relevant texts, artifacts and other exhibits. An impression is created at the entrance of ground floor by displaying the logo of the Supreme Court (Dharamchakra upheld by the Lion Capital of 3rd Century B.C.) in an appropriate ambience.“

In the last stage of the verification, Vishvas News interacted with Supreme Court Advocate, Adv Prashant Patel who had fought a year-long battle to reverse the Delhi govt decision to appoint 21 of its legislators as parliamentary secretaries in March 2015.
He informed Vishvas News that since its inception (1950), the motto of Supreme Court has been, ‘यतो धर्मस्ततो जयः’ and not Satyamev Jayate.

We also conducted a social background check on the Twitter user who shared the claim, Raj Vasava (Indigenous) on his profile through his bio we found that he is BTP – Vice President, MP Contestant, Founder Member of BTS, Social Activist, PGD Degree holder – England, Indigenous. 3,812 people follow him on Twitter.

Conclusion: The motto of Supreme Court of India has always been, ‘Yato Dharmostato Jayah’ it was not Satyamev Jayate, the viral claim is false, Supreme Court has not changed its motto.