Fact Check: This heavily software-processed image of the Sun has no connection with NASA

The viral photograph has no connection with NASA. An American photographer Jason Guenzel has clicked and edited the picture with the help of filters and software. 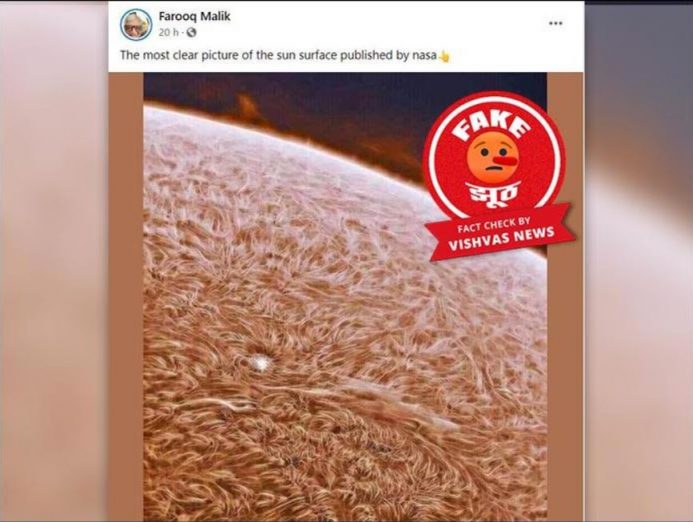 Vishvas News investigation revealed the claim is fake. The picture has no connection with NASA. Originally it was clicked and edited with the help of software by American photographer Jason Guenzel.

Facebook user Farooq Malik share the photograph with a caption that reads: “The most clear picture of the sun surface published by nasa👆”
The archived version of the viral post can be seen here. https://perma.cc/E6UF-NBS2

We also found the profile of Jason on this website which says that he hails from the great State of Michigan.

We found that Jason had tweeted the viral image on January 13, 2021, with a caption: “This heavily software-processed image of the solar chromosphere reveals the complex nature of the magnetic field within our star. Walking the thin line between science and art … perhaps blurring it a bit. 😉 #Astrophotography #space #solar #star #power”

On his Instagram account, he posted this image on January 12 where he clarified that he heavily processed the resulting image into a stylized rendition of the visible surface of the sun.

We reached out to Jason through email where he confirmed that the viral photograph is his creation and some people are wrongly attributing this to NASA. While replying to our mail he wrote: “I find it interesting to reveal the details that are unseen by the human eye. It was shot through a solar telescope using a filter that blocks all the light except that emitted by hydrogen.”

We also checked the official website and social media handles of NASA but couldn’t found the viral image anywhere. Vishvas News contacted Karen C. Fox, Heliophysics Communications Lead at NASA HQ who told us that this is not a NASA image, it is a ground-based H-alpha image that has been digitally enhanced to create an attractive artistic image – which Jason Guenzel originally posted on his Instagram.

Social scanning of the Facebook user who shared the claim revealed that Farooq Malik lives in Lahore, Pakistan.

Conclusion: The viral photograph has no connection with NASA. An American photographer Jason Guenzel has clicked and edited the picture with the help of filters and software.