Fact Check: This painting does not exist in Panj-sheer palace, it is an artwork by a Russian artist

Painting being shared claiming to be kept in Panj-sheer palace is an artwork of Russian artist. Viral claim is fake. 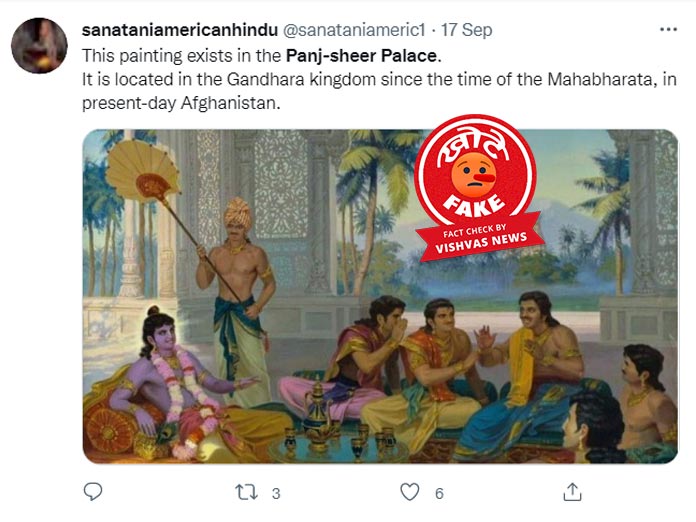 New Delhi (Vishvas News): Vishvas News came across a painting being widely shared on various social networking platforms. It was claimed in these posts that the painting, which appears as a scene from one of the Indian epics, exists in Panj-sheer Palace in Afghanistan. However, in the investigation, it was found out that the painting is an artwork by a Russian artist and is not anywhere in Panjshir.

Claim:
Vishvas News came across a beautiful painting, shared by a Facebook page ‘Charapal Vs Lokpal’ on September 19. The post claimed: This painting exists in the Panj-sheer Palace. It is located in the Gandhara kingdom since the time of the Mahabharata, in present-day Afghanistan. Why has UNESCO not declared it a heritage site and ensured that it not be destroyed?????????
The name ‘Panjsheer’ is an aberration of the original name ‘Panch sher’ meaning Five (pancha) Lions (sher). The painting and the Palace were built in honour of the Five Pandava brothers. All Asians know that Gandhara was a totally Hindu Kingdom even in the late Buddhism period. It then fell to muslim shia sect, invaders who promptly converted it into an Islsmic kingdom. However, even they did not destroy the Hindu legacy and the royal remnants, such as this painting and many other valuable antiques depicting Hindu culture in Gandhara. Today, the region is called Khandara, known for its famous trans-continental market. Most Hindu temples have continued to exist in Khandara. BUT, now sunni-sect dominated Talibans have taken over Afghanistan. Historians who actually know the history of Bharat genuinely fear that all Hindu people in Afghanistan, and Hindu memorabilia will be destroyed. We have very little time left to consider the consequences of these human living pieces of history.
साभार

We noticed that under the author of this painting, there was a name, ‘Rasikananda’ which means that the original artist of this artwork is ‘Rasikananda’.

We checked the artist section on the website. We found out that, ‘Rasikananda was born in 1973 in Komsomolsk-on-Amur. Graduated from art school. From 1990 to 1993 he studied at the Vladivostok Art School. Since 1993 he has illustrated books by the international publishing house BBT (Bhaktivedanta Book Trust). Member of the Creative Union of Artists of Russia and the International Federation of Artists (IFA).’

On searching over various social media platforms, Vishvas News found the Facebook profile of the artist.

Rasikananda Das, had also shared a post on his profile, stating that his artwork (the same painting) was doing rounds with false claims.

In the next step of investigation, Vishvas News got in touch with the artist himself.

Talking to Vishvas News, Rasikananda Das said, “Hare Krishna! Yes it’s my painting, I did it in Sochi, South Russia in 1999. The subject for this illustration is from Srimad Bhagavatam, 7-th canto. This painting is my original creation and it is not Panjshir at all. All what they wrote is just a fake.“

We also checked if there is a palace by the name Panjashir or Panj-sheer.
We did not find any such place during the investigation.

In the last step of investigation we scanned the FB page that shared the post, Charapal Vs Lokpal is liked by over 11,572 people. Another user sanataniamericanhindu has 2824 followers and follows 4590.

Conclusion: Painting being shared claiming to be kept in Panj-sheer palace is an artwork of Russian artist. Viral claim is fake.