Fact Check: This picture of Mike Tyson is edited; there was no anti-vaccine slogan on his t-shirt

This claim is fake. The picture is morphed. The t-shirt that Mike Tyson wore in the original picture did not have any slogan written on it. The t-shirt had a portrait of Tyson printed, with ‘Tyson’ written under it. 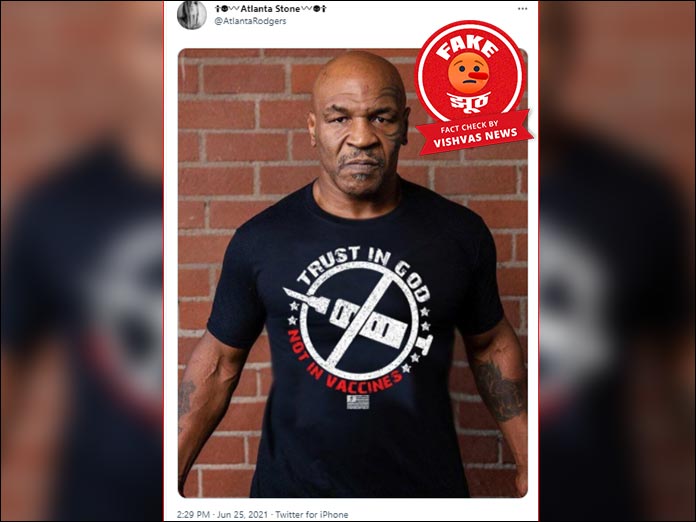 Vishvas News (New Delhi). Amidst the ongoing Corona vaccine campaign around the world, a picture of legendary American boxer Mike Tyson is going viral, in which an anti-vaccine slogan can be seen written on his T-shirt. Sharing this picture, social media users are claiming that Mike Tyson is opposing the corona vaccine. This claim turned out to be false in the investigation of Vishvas News. Actually, this picture is edited. The t-shirt that Mike Tyson wore in the original picture did not have any slogan written on it.

Facebook user Antonio Wicks shared the viral picture on June 30, 2021, with the caption “Former champion boxer Mike Tyson sends the message ‘I believe in God; Not Vaccines with a shirt he wears.”

Vishvas News first used Google reverse image search tool on the viral picture to investigate. We found this picture on https://www.republicworld.com. In this news article uploaded on November 28, 2020, there was a photo collage of Mike Tyson and Roy Jones Jr. The picture of Mike Tyson used in this collage was exactly the same as the viral picture, but in the picture used here, there was no slogan written on Mike Tyson’s t-shirt. In this photo, a portrait of Tyson was printed on his t-shirt with ‘Tyson’ written under it.

We also found this picture on Mike Tyson’s verified Instagram handle. https://www.instagram.com/p/CH8je5ght9b/ Here it was uploaded on 24th November 2020. In this picture too, a portrait of Tyson was printed on his t-shirt with ‘Tyson’ written under it.

The parity in both photos can be seen in the collage below.

We contacted Jagran’s sports correspondent Abhishek Tripathi regarding this. He told us, “This picture is fake. To my knowledge, he has not worn any such t-shirt in any public event. The T-shirt he was wearing in the original picture had his own picture on it.”

We also contacted Tyson’s publicist, Joe Mignano, via email. He said, “this image is photoshopped.”

We searched the internet with keywords but could not find any news where Tyson expressed his views against the vaccine.

Now it was time to scan the profile of the user ‘Antonio Wicks’ who shared the post on Facebook. On scanning the profile, we found that the user is a resident of Texas, USA.

Conclusion: This claim is fake. The picture is morphed. The t-shirt that Mike Tyson wore in the original picture did not have any slogan written on it. The t-shirt had a portrait of Tyson printed, with ‘Tyson’ written under it.