Fact check: Video going viral in the name of cyclone in Kerala, is of 2019 from Dhule in Maharashtra

The video being widely shared in the name of cyclone in Kerala, belongs to Dhule, Maharashtra. The video went viral in 2019 when cyclone Vaayu had hit the state. 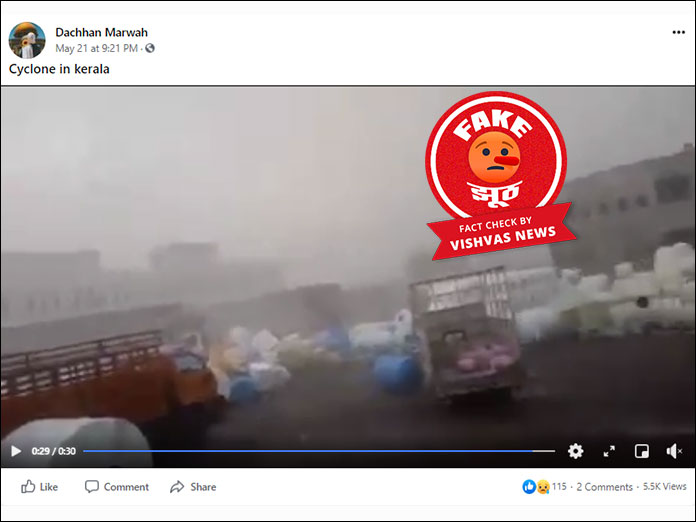 New Delhi (Vishvas News): Amidst the numerous news reports of cyclones that have hit the country, various videos are going viral over the social media platforms. Vishvas News came across one such video that garnered over a thousand views. The user claimed that the video was that of a cyclone in Kerala.
Vishvas News conducted an investigation into the same, and found out that the video was not from Kerala but from Maharashtra and that too from the year 2019.

Claim:
Facebook user Dachhan Marwah uploaded a video on May 21 with the caption, cyclone in Kerala. One can see an industry set up in the viral video and the can see the goods being taken away by the strong cyclone winds. The video had 101 shares and over 5.5K views till this news was being written.

Check the video  here and its archive version here.

Investigation:
Vishvas News in the beginning of the investigation saw and listened to the video carefully. What we noticed was that the people in the video spoke Marathi language which belongs to Maharashtra. People are clearly heard saying, ‘Gaadi challi paha‘, meaning ‘look the vehicle is moving’.
This was hence clear that the video can probably be that of Maharashtra.

Another thing that Vishvas News noticed during the investigation, was a comment on the Facebook post that said, ‘Old’. This prompted us to believe that the video doesn’t belong to the current cyclones that hit the country.

After doing a keyword search we also found the video on the YouTube channel of Navbharat Today. The video was uploaded on 15 June 2019.

The description in the video said, “Cyclone Vayu in Dhule Maharashtra”.

In the last step of the investigation Vishvas News contacted a senior journalist based in Dhule, Prashant Pardeshi. He told Vishvas News that the video being circulated now is of 2019 from Dhule MIDC area.

We also found a video which was uploaded on 12 June 2019. The description said, “Dhule Breaking News”. The video belonged to a Marathi news channel, ‘News18 Lokmat’.
See the video here:

Vishvas News conducted a social background check of the page who shared the video. ‘Dachhan Marwah’ has 32.7K followers on Facebook and the page usually shares all the viral videos.

Conclusion: The video being widely shared in the name of cyclone in Kerala, belongs to Dhule, Maharashtra. The video went viral in 2019 when cyclone Vaayu had hit the state.