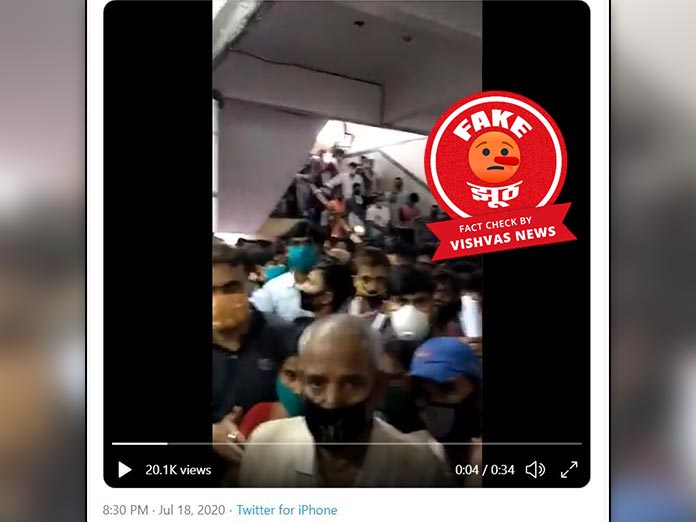 New Delhi (Vishvas News): In a video going viral on social media, the crowd of patients can be seen inside the hospital. It has been claimed that the video is of a hospital in Delhi.

Vishvas News investigated and found the claim to be false. The video is viral across social media with different claims. In fact, the video is of Mahavir Cancer Institute, located in Patna, Bihar.

Twitter user ‘RenukaJain’ shared the viral video (archive link) with a claim that read: ”While @ArvindKejriwal…. is busy with full page advertisements this is true pic of Delhi.”

Some users have shared the video on social media with a claim that the crowded hospital as shown in the viral post is Victoria Hospital of Bengaluru.

Vishvas News investigated and found a tweet dated July 19, 2020, by Bangalore Police Commissioner Bhaskar Rao in which he has informed about the arrest of the person who shared this video by referring to the Victoria Hospital in Bangalore.

It is clear that the video going viral is not from the Victoria Hospital in Bengaluru.

Some users shared the video with the claim that the incident is from AIIMS, Patna.

We also found a bulletin uploaded on July 16 on the verified YouTube channel Bharat Live describing the video as that of AIIMS, Patna.

We further investigated and found the same video on the Facebook page ‘Bihar‘, in which it has been described that the video is of Mahaveer Cancer Institute, Patna.

Commenting on this post, a person named Rana Singh wrote, “My name is Dr. Rana Singh and I have shot this video myself. I am a doctor at the Mahaveer Cancer Institute and hold the post of medical officer. I took this video yesterday, July 15, when a crowd of patients went uncontrolled near the corona screening OPD number 5.”

The information given on Mahavir Cancer Institute website confirms Dr. Rana Singh to be a Medical Officer in the hospital.

Vishvas News spoke to Dr. Rana Singh regarding the video. Dr. Singh said, ‘This video was made by me and it is from the OPD (No. 5) of the hospital.” He added, “Some of the employees of our hospital are COVID-19 positive. Because of this work got affected for 4-5 days. When the hospital opened, a large number of patients gathered in the OPD.”

Singh said, “I made a video to tell the management about this and the management took immediate cognizance of the seriousness of the situation. Several decisions have been taken by the hospital management so that patients do not have to face such situation again. The files of patients have now been linked to different departments so that the patient can reach the concerned department directly.”

Detailed information about this has also been given on the verified Facebook page of Acharya Kishore Kunal. According to the information given, the incident took place on July 15, when after some days, the cancer institute opened and suddenly there was a rush of patients.

The user, who shared the viral video with the wrong claim, has shared in its accounts that he is a financial tax adviser.

The video showing the crowd in hospital viral is going viral with fake claim. The video is of Mahavir Cancer Institute, located in Patna, Bihar.