Fact-check: Viral claim rubbishing Dabhadkar admission to the hospital and his death are fake

Viral claim rubbishing Dabhadkar admission to the hospital and his death are fake. Dabhadkar did lose his battle to coronavirus and was admitted to Indira Gandhi Hospital, Nagpur. 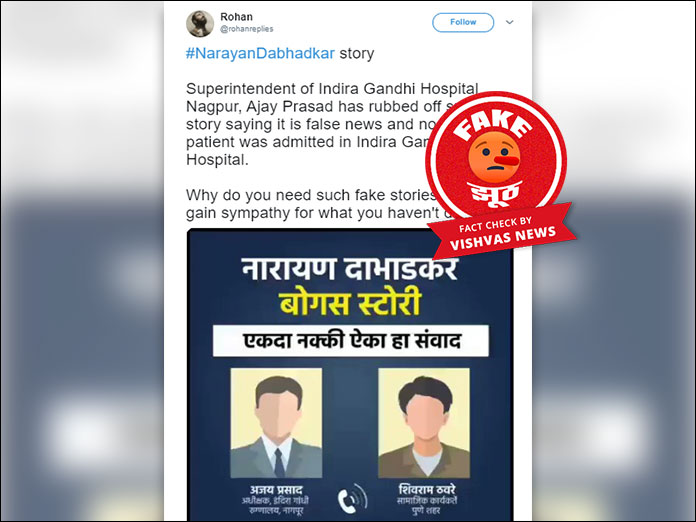 Vishvas News (New Delhi): A heart-wrenching incident came up from Nagpur where it was claimed that an 85-year-old senior citizen vacated bed for a younger patient and died later at his residence. However, there are a few other claims over internet that this news is fake and that no such incident took place in Nagpur. An audio clip of a dean from a hospital too is going viral over Internet. Vishvas News investigated the matter and found that the senior citizen indeed went from hospital to his residence and died later. The viral claims saying that 85-year-old Narayan Dabhadkar is alive and was not admitted to the hospital are not true. Dabhadkar passed away after he was shifted home from the hospital to his residence.

Claim:
After the news of Narayan Dabhadkar’s demise, many viral posts on social media are claiming the news of his hospitalisation and death at his residence are fake.

An Internet user Rohan @rohanreplies shared an audio clip and wrote: “NarayanDabhadkar story. Superintendent of Indira Gandhi Hospital Nagpur, Ajay Prasad has rubbed off such story saying it is false news and no such patient was admitted in Indira Gandhi Hospital. Why do you need such fake stories? Just to gain sympathy for what you haven’t done!”

The tweet was later deleted. You can check the archive version here.

Translation: While social media is full of various claims, according to the information received till now, it appears that Dabhadkar did not leave his bed for another patient.

The daily however, edited the entire article and published a different version the next day talking to the family members and the hospital authorities.

Here’s the archived version of the article.

A WhatsApp post too went viral claiming it to be from ABP Maza a news channel, which said Dabhadkar was alive. Check the post below.

Vishvas News started its investigation and found many media reports which claimed that an incident like this did happen in Nagpur.

It found a news clipping going viral over the internet. The clip was found to be from Lokmat News Network, which is a newspaper from Nagpur.

Check the news clip below:

Owing to various claims over the internet. Vishvas News then decided to check with the hospital mentioned in the media reports. The media reports mentioned a hospital named Indira Gandhi Hospital, Gandhi Nagar, Nagpur.

However, it is to be noted that there are two hospitals named in Nagpur after Indira Gandhi – one is ‘Indira Gandhi Government Medical College and Hospital’ also known as Mayo, located at Central Avenue, Nagpur and another is Indira Gandhi Hospital, Gandhi Nagar, Nagpur.

The audio clip going viral over the internet was that of the dean of Mayo, Dr Ajay Prasad. Whereas, the newspapers mentioned the name of one ‘Dr Ajay Hardas‘.

Dr Ajay Hardas accepted that Narayan Dabhadkar was indeed admitted to his hospital and was undergoing the treatment. He also accepted that once his oxygen levels improved he along with his family members requested him to be taken to home. However, he was not sure about the reason why the patient insisted to go home from hospital.

Talking to Vishvas News, Hospital Superintendent of Indira Gandhi Hospital, Dr Sheelu Chimurkar Gantawar too said that Narayan Dabhadkar was admitted to the casualty ward and that the ward was fully occupied that day.

We also found a video of his daughter Asawari Dabhadkar Kothiwan, shared by Omkar Dabhadkar, where she narrated the entire incident. She clearly mentions in the video that her father asked the family members to take him to home. She also claimed that her father was very troubled with constant plea of the families of other patients. She also confirmed that her father passed away at the residence due to Covid complications.

Shivani Dani Wakhare, state general secretary of Bharatiya Janata Party Yuva Morcha in her Facebook post too has shared pictures, where one can see Narayan Dabhadkar admitted to the hospital, and a letter with respect to DAMA (Discharge Against Medical Advice), video of his daughter.

The letter of DAMA was also shared with Vishvas News by one of the senior journalists of city, which you can see below.

Now, we needed to find out whether ABP Maza really carried a story where it claimed that Narayan Dabhadkar is safe and is with family. Later, Vishvas News found that the channel shared on its social media handle that the post claiming Narayan Dabhadkar is alive which was attributed to the channel was actually fake and confirmed that they did not publish any such news.

In its final step of investigation, Vishvas News interacted with thedaughter of Narayan Dabhadkar, Asawari Dabhadkar Kothiwan. An angered Asawari said, that her father had lived his full life and they never intended to publicize her father’s decision to take him home from the hospital.

“We are devastated with claims being shared online. If someone claims that my father is alive, please bring him home I will be more than happy. We are still in the mourning period and these claims have really disturbed us,” She said.

Vishvas News conducted a background check on the user who had shared the audio clip stating he was not admitted, @rohanreplies . We found that the account did not exist anymore.

Conclusion: Viral claim rubbishing Dabhadkar admission to the hospital and his death are fake. Dabhadkar did lose his battle to coronavirus and was admitted to Indira Gandhi Hospital, Nagpur.