Fact Check: Viral Photo Is Part of Themed Photoshoot in India and not of Overworked Frontline Workers In Sri Lanka 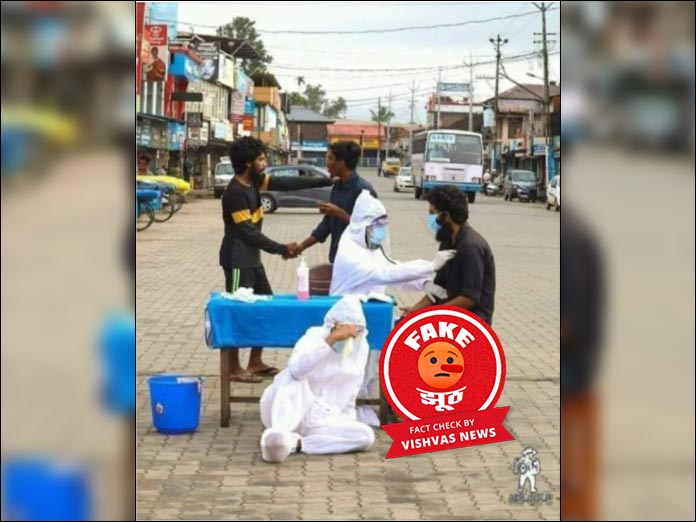 New Delhi (Vishvas News): A photo going viral on social media shows exhausted health workers in personal protective equipment. The claim shared in the Sinhala language, which is the official language of Sri Lanka states that the picture is of overworked frontline workers at this point of time. When Vishvas News investigated we found the viral post to be fake. The photo is a part of a themed photoshoot that took place in Kerala, India.

The viral post on social media claims in Sinhala language (roughly translated to English): I have seen a lot of talking pictures.. but I have seen a picture that speaks real.. It’s obvious the person who took this picture is actually giving a big message to society right now.. Don’t take it for a joke..Think well about those sacrifices in the health sector.”

We noticed that the language of the post is Sinhala, which is the official language of Sri Lanka. The post text did not specify the location of the photo, but comments on the post suggested that believed it showed health workers in Sri Lanka.

When we examined the video closely we found a logo reading Bino_Adam_73.

We performed a keyword search and found the same photo on the Instagram page of the user named Bino Adam.

Bino Adam is a photographer based in South India. He captioned the post: “It simply came to our notice then. We have two views to see … The heart that fights against the great disease with the mind that is eager to jump even when it falls … The other side of the heartless who betray the whole world …”

Vishvas News contacted Bino Adam regarding the viral post and he said that the photo was clicked during a themed staged show that was organized to increase awareness of the struggles of frontline workers during the Covid-19 pandemic. It was clicked in Kerala.

Vishvas News scanned the profile of the user who shared the viral post and found that the user named Ruchika Magammana is based out of Colombo, Sri Lanka.

Conclusion: The viral photo is a part of a themed photoshoot in India and not of overworked frontline workers in Sri Lanka. The viral post is fake.