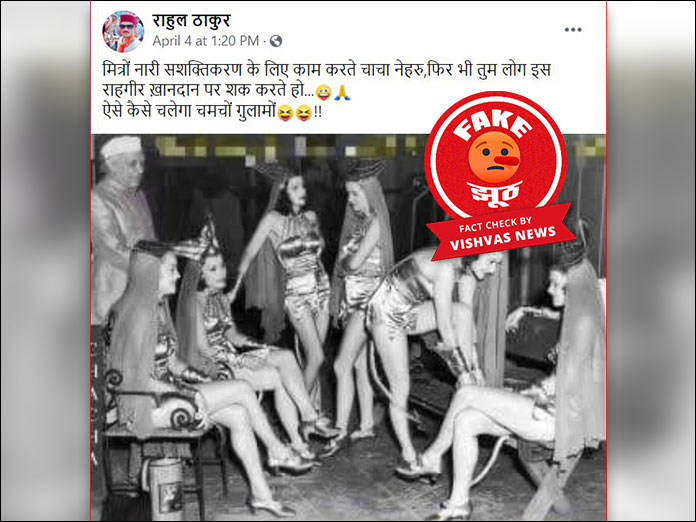 Vishvas News (New Delhi): The photo of India’s first Prime Minister Jawaharlal Nehru has resurfaced on social media. In the photo, Jawaharlal Nehru can be seen standing with some women. The post sarcastically claimed that Nehru is working on women empowerment.

Vishvas News investigated the posts and found it to be fake. Morphed photo of Jawaharlal Nehru was created and shared with the sarcastic claim.

On April 4, 2021, Facebook user Rahul Thakur uploaded a fake picture of Jawaharlal Nehru in a group, writing: ‘Friends, chacha Nehru working for women’s empowerment, yet you doubt this passer-by family … How will the slaves run away!! ‘

Vishvas News started searching the viral image using the Google reverse image tool, but we found the same picture everywhere in the search result that was going viral

We spoke to the Congress spokesperson Akhilesh Pratap Singh regarding the viral picture. He said that it is not the first time that an attempt has been made to discredit Nehru. This has been done many times before also. The viral photo is fake.

We scanned the profile of the Facebook user Rahul Thakur who shared the viral photo. We found that the user is a resident of Shimla and 933 people follow him.

Conclusion: Vishvas News investigated the post and found it to be fake. A morphed photo of Jawaharlal Nehru was created and shared with the sarcastic claim.