Fact Check: Viral post claiming to be Tanishq Diwali giveaway is a scam

The Tanishq Diwali gifts ad viral on social media is a scam. It has nothing to do with the jewellery brand Tanishq as the communication regarding giveaways is entirely fake and dangerous. 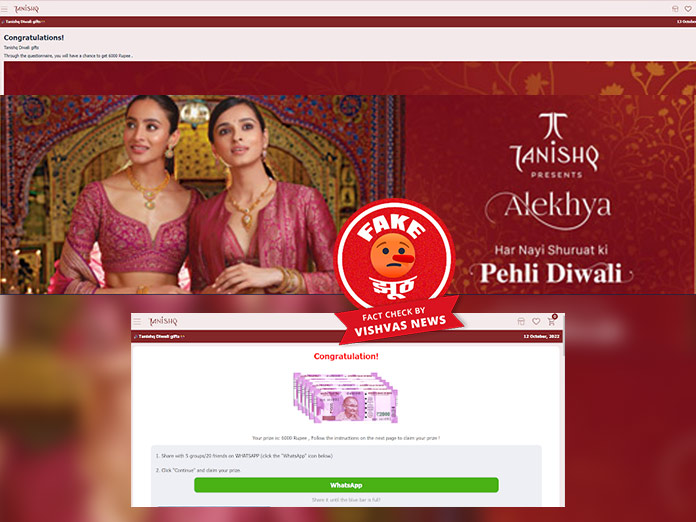 New Delhi (Vishvas News): Diwali is around the corner, and many companies are offering festival gifts. But a post on social media is claiming that Tanishq, a TATA product and a jewellery brand, is now offering Diwali giveaways. One has to simply click a link and answer a questionnaire for a chance to win Rs 6000.

However, Vishvas News, in its investigation, found the circulating message to be fake, created for scamming purposes and not sponsored by the jewellery brand.

Similar links like this and this were also found circulating on WhatsApp groups and Twitter accounts. Here is the link to the message.

Firstly, Vishvas News investigated by checking the Twitter and Facebook accounts of Tanishq, but no such advertisement or promotional message was found on their social media. However, we found posts of the ‘Alekhya by Tanishq’ collection post that shared a similar picture of the models.

Many social media users also shared awareness posts and queries regarding the same, following which Tanishq replied – “Hi, Unfortunately, there has been fake communication regarding Tanishq’s giveaways, none of which has been issued by the brand Tanishq. We deeply regret the inconvenience caused and working on resolving this at the earliest.”

We also got a similar reply from an expert (Rakshita) on the Tanishq official website chatbox, who responded by calling the link fake and asking us to ignore it as the team is already working on it. Below is the screenshot of our conversation with her.

To verify further, Vishvas News thoroughly observed the website link and found it to be dubious in below ways:

For the final confirmation, we spoke to the cyber security expert Anuj Agarwal, who said, “In the name of sending titillating offers and discounts on big brands through links, malware is downloaded and phones hacked, making all data including OTP, visible to hackers.”

On scanning the social media of the user, we found that he is followed by 43 people and has been a member of the Local Football Fan”s club since 30 August 2022.

Conclusion: The Tanishq Diwali gifts ad viral on social media is a scam. It has nothing to do with the jewellery brand Tanishq as the communication regarding giveaways is entirely fake and dangerous.