Fact Check: WHO clarifies remarks after it said coronavirus transmission by asymptomatic people is ‘very rare’; viral video is old and misleading 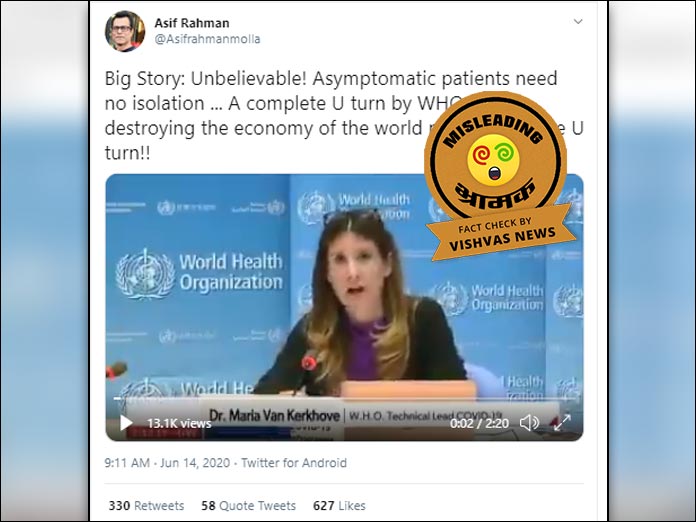 New Delhi (Vishvas News): A video of is doing rounds on social media in which Dr Maria Van Kerkhove, an infectious disease epidemiologist and the technical lead on COVID-19, WHO Health Emergencies Programme can be seen. The caption with the video claims that the World Health Organisation (WHO) has taken a ‘U-turn’ and that the asymptomatic COVID-19 patients needn’t be isolated or quarantined as they cannot spread coronavirus. Vishvas News investigated and found the viral claim to be misleading.

A video is shared on Twitter by a user named Asif Rahman shows in which Dr Maria Van Kerkhove, technical lead COVID-19, WHO Health Emergencies Programme can be seen. The caption with the video reads: Big Story: Unbelievable! Asymptomatic patients need no isolation … A complete U turn by WHO. After destroying the economy of the world now a complete U turn!! The archived version of the post can be checked here.

When Vishvas News investigated we found that the viral clip is the part of a press briefing that was held by the World Health Organization on June 9. The complete briefing can be assessed here.

Dr Maria Van Kerkhove, infectious disease epidemiologist and the technical lead on COVID-19, WHO Health Emergencies Programme says during the press briefing, “We have a number of reports from countries that are doing very detailed contact tracing. They’re following asymptomatic cases, they’re following contacts and they’re not finding secondary transmission onward. It’s very rare and much of that is not published in the literature. We are constantly looking at this data and we’re trying to get more information from countries to truly answer this question. It still appears to be rare that an asymptomatic individual actually transmits onward.”

Dr Maria Van Kerkhove said that the transmission is very rare it did not say that asymptomatic patients cannot spread COVID-19.

WHO later clarified in a live question and answer (Q&A) session retracting the claim. “I was responding to a question at the press conference. I wasn’t stating a policy of WHO or anything like that. I was just trying to articulate what we know,” Kerkhove said. “And in that, I used the phrase ‘very rare,’ and I think that that’s misunderstanding to state that asymptomatic transmission globally is very rare. I was referring to a small subset of studies,” she added.

We further investigated and found a tweet by the World Health Organization (WHO) clarifying its statement. They tweeted: “Since early February, we have said that asymptomatic people can transmit #COVID19, but that we need more research to establish the extent of asymptomatic transmission. That research is ongoing“-@DrTedros

According to the guidelines of World Health Organization, while current evidence suggests that most transmission happens from people with symptoms to others in close contact, there is also the “possibility of transmission from people who are infected and shedding virus but have not yet developed symptoms.”

Vishvas News spoke to the Technical Officer at World Health Organization and she said that the video is old and in which it has been stated that the asymptomatic transmission is rare. However, it has been further clarified in a tweet that the research on the same is ongoing.

The tweet was shared by a user named Asif Rahman. When Vishvas News scanned the profile of the user we found that the user is based has 2874 followers.