2022 was full of ups and downs in terms of national and international developments and accordingly, the misinformation scenario in India kept changing rapidly. There is hardly any corner of our society which is unaffected by its ill effects. It is a big challenge in today's time, due to which not only economic loss is being caused, but people's lives are being put in danger. 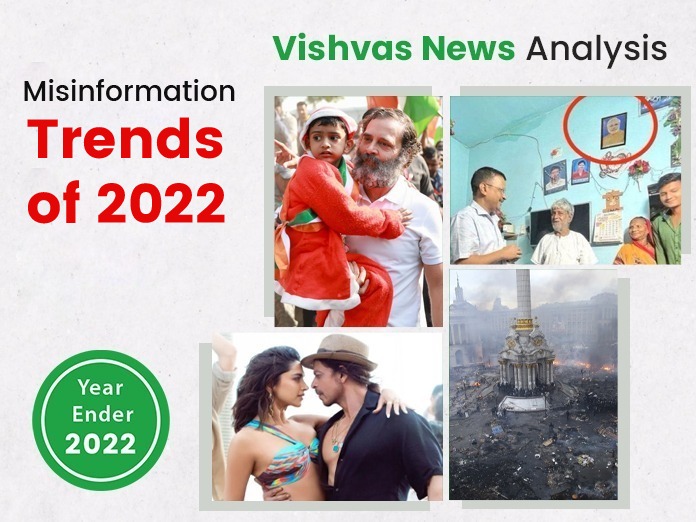 New Delhi (Vishvas News): The manipulation of information and conveying it to people in the wrong context has a long history. Technological advancement has not only made the tampering of information easier but has also given a wider platform for its dissemination. Fake news has become a global challenge in today’s times, which is no longer limited to political disinformation.

It emerged as an infodemic during the time of the COVID-19 pandemic and now covers climate change, the environment, entertainment, and general information. The emergence of multiple social media platforms has accelerated the spread of false and misleading information, and it is constantly changing its form.

2022 was full of ups and downs in terms of national and international developments and accordingly, the misinformation scenario in India kept changing rapidly. There is hardly any corner of our society that is unaffected by its ill effects. It is a big challenge in today’s time, due to which not only economic loss is being caused, but people’s lives are being put in danger.

The seriousness of the situation can also be gauged from the fact that since 2018, the National Crime Records Bureau (NCRB) has started publishing data under this category, and as per the 2021 report, 280 cases related to fake news were registered in 2018. The number of these increased to 486 in 2019, while such cases witnessed a massive increase in 2020 (due to the Covid pandemic) and its number increased to 1,527, which is an increase of more than 200 per cent.

However, in 2021 the number of such cases came down to 882. NCRB publishes the relevant data considering cases registered under section 505 of IPC falling under this category. According to a research report published in 2021, India, America, Brazil and Spain were the top four countries affected by misinformation and social media played the biggest role in spreading it.

Vishvas News published more than 1,500 fact-check reports in the Hindi language during the year 2022 and the analysis of these reports tells us about the trends of misinformation in India in 2022. Based on Vishvas News’ analysis of total fact-check reports during the year, we found that the number of fake claims related to EVMs in the 2022 elections was negligible. Also, there was also a decrease in the cases of misinformation related to Covid-19, the number of which was the highest in 2020 and 2021.

The year began with the Russia-Ukraine war and Indian social media platforms were flooded with misinformation related to it. Apart from the Russia-Ukraine war, Bharat Jodo Yatra, Assembly elections, Morbi bridge collapse incident, Rishi Sunak becoming the Prime Minister of Britain, the controversy over the FIFA World Cup and the Pathan movie at the end of the year, were among the top topics on which misinformation was shared on the social media.

Vishvas News published a maximum number of fact-check reports related to this war in the month of March. Apart from the Russia-Ukraine war, assembly elections in five states were also held during these months, due to which misinformation became viral on different platforms of social media. Reports investigating misleading claims related to the Assembly elections accounted for over 19 per cent and over 12 per cent in the month of February and March, respectively.

The number of false claims declined as the war dragged on, and was replaced by national developments over the next few months. On September 7, Rahul Gandhi’s Bharat Jodo Yatra started in South India and in September-October, November and December, the propaganda about this yatra dominated social media.

An analysis of Vishvas News’ Fact Check reports filed in 2022 reveals that since the start of the Bharat Jodo Yatra till its continuation, a lot of misleading and fake claims related to it were shared on social media. In September, October, November and December, the share of fact-check reports related to the yatra was more than 13 per cent, 13 per cent, 9 per cent and 12 per cent, respectively. Fake photographs and old videos (mostly edited video clips) were shared the most as false information regarding the Bharat Jodo Yatra.

The third major trend of the year was the assembly elections (especially in Gujarat) and the Morbi incident. In October, November and December, there was a spurt in propaganda related to the assembly elections. In these three months, the share of election fact-check reports in the total fact-check reports of Vishvas News was about 10 per cent, 15 per cent and 12 per cent, respectively.

Fake claims related to the Morbi bridge collapse also surfaced during the elections, the most popular among them was an RTI claim that Rs 30 crore was spent by the local administration on Prime Minister Narendra Modi’s visit after the Morbi tragedy. Another popular claim was the fake manifesto of the Aam Aadmi Party, which only mentioned the announcements made for the minority community. This claim was also proved false in our investigation.

Apart from this, most of the claims related to elections were altered video clips of leaders, altered photographs and fake exit polls. In the last few elections, the number of false claims regarding EVMs was high, but this time the trend seems to be reversing. Between October and December 2022, Vishvas News fact-checked only two such claims, which were related to EVMs. The first report was an investigation into a fake statement attributed to former Election Commissioner T S Krishnamurthy, which was related to EVM hacking. The second report was related to the video that surfaced after the last phase of voting in Gujarat, which claimed that EVMs were tampered.

After Rishi Sunak became the Prime Minister of Britain, many such claims were shared on Indian social media, in which he was described as a Sanatani supporter. Many such claims came to the fore in the month of October. Claims related to it constituted about eight per cent of the total fact-check reports of Vishvas News this month. The months of November and December were in limelight due to the FIFA World Cup and Pathan movie controversies. Claims related to FIFA and Pathan movie accounted for about 17 per cent of the total fact-check reports in both months.

At the end of the year when Assembly Elections in Gujarat and Himachal Pradesh were held, most false claims were related to Gujarat polls. The number of misleading information related to EVMs remained very less and altered video clips and edited images of the leaders were shared mostly.

At the same time, during the Bharat Jodo Yatra, altered images and videos of Rahul Gandhi were shared, which were not related to this Yatra. After the controversy regarding the promotion of the film Pathan, many such edited videos appeared on social media, through which questions were raised on the nationalism of Shah Rukh Khan.

Disclaimer- The December figures in this analytical report are the figures of the report published in Vishvas News Hindi till December 23.