Fact Check: No, the girl in video is not Russian President Putin’s daughter, misleading post on COVID-19 vaccine going viral 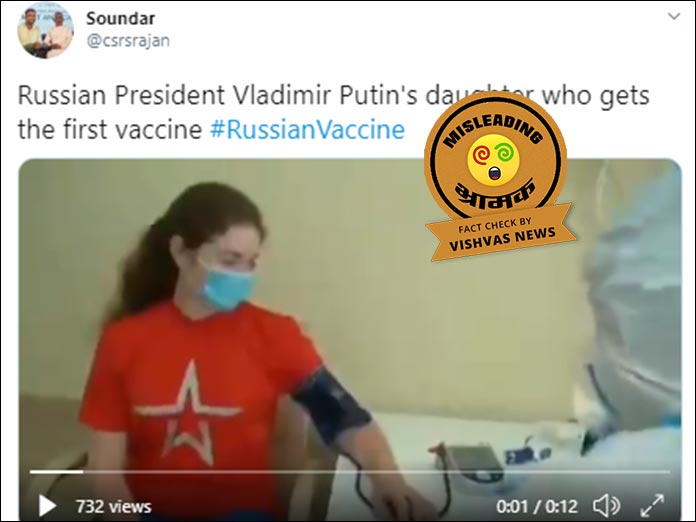 New Delhi (Vishvas News): A viral post on Twitter shows a video in which a girl can be seen getting vaccinated. The caption with the video claims that the girl is Russian President Vladimir Putin’s daughter who is getting the first coronavirus vaccine. When Vishvas News investigated we found that the girl shown in the video is not the daughter of Russian President Vladimir Putin. On August 11, 2020, the Russian President announced that the country has successfully developed the world’s first vaccine offering “sustainable immunity” against coronavirus. One of Putin’s daughters got vaccinated against COVID-19 but the girl shown in the viral video is someone else, not the President’s daughter.

A post doing rounds on Twitter shows a girl getting a vaccine. The caption in the video read: “Russian President Vladimir Putin’s daughter who is getting the first vaccine.” The archived version of the post can be checked here.

Vishvas News investigated by performing Google Reverse Image search of the screengrabs of the video we extracted using the InVid tool. During our search, we found the same video used in a report on the website of Russia Today. The article dated July 20, 2020, is titled: Covid-19 vaccine created by Russian military is closer to approval after last volunteers discharged from hospital (VIDEO).

The article stated that volunteers who took part in a clinical trial for a Russian Covid-19 vaccine have been discharged from a military hospital in Moscow. Nowhere in the article was it stated that the girl shown in the video is Putin’s daughter.

We further investigated and found a Youtube video dated June 25, 2020. The video shows the interview of the same woman as shown in the viral video:

The description written in the Russian language translates to: (English) “Volunteer Natalia is preparing to become a military doctor. Cadet of the final course of the Kirov Military Medical Academy. Fluent in English. Candidate master of sports in marine all-around. She has repeatedly won prizes in Russian and international championships and regattas.”

The girl in the video is a volunteer named Natalia.

We performed a Google search using appropriate keywords. We found a report dated July 14, 2020, mentioning that Natalia was one of the volunteers during the vaccine trial. The article clearly states that the girl in the video is Natalia.

According to a report published in Russia Today, Vladimir Putin announced on Tuesday morning that Russia has registered the world’s first vaccine against coronavirus. He says the dose is effective in forming immunity against the deadly pathogen which has spread globally. He also revealed that one of his daughters has already been vaccinated.

Vishvas News, in an email conversation, contacted Chanindu from the Client Service Team of Russia Today. Russia today carried the same video of the volunteer in one of its reports. He said: “The volunteer shown in the video is a general volunteer who agreed to help with testing of the vaccine. RT has not mentioned at all that the girl mentioned in the RT footage is Putin’s daughter. Therefore we confirm that Putin’s daughter is not the girl on the video.”

The post is shared on Twitter by a user named Soundar. When we scanned the profile of the user we found that the user is based out of Chennai, India.

The girl shown in the video is not the daughter of Russian President Vladimir Putin but a volunteer named Natalia.