Fact Check: All deadly poisons can be treated immediately on call, is a fake post 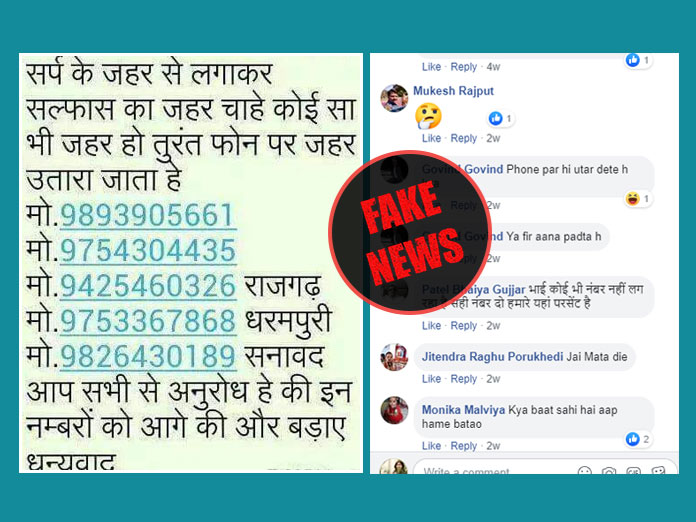 A post is doing rounds on social media with a claim that any type of poison (from snake poison to celphos poison) can be cured on call immediately. Vishvas News investigated and found that the claim is false.

Vishvas News started the investigation by calling the numbers mentioned on the viral post.

We called up the first number 9893905661. The incoming calls were not available on this number as it wasn’t recharged, as per IVR.

Vishvas News called up the third number 9425460326 as mentioned in the viral post. The number was received by someone. Upon asking how they cure poison over call, a person said that he chants a mantra on phone to the patient. When we further enquired he disconnected the call and switched off his phone.

By talking on one of the numbers mentioned in the viral post it was clear that they chant a mantra on the phone which they say can treat any type of poison.

We then searched online that whether all types’ of poisons can be cured by chanting a mantra. There were some reports which stated that in ancient times, some people used to chant mantras and followed some treatments for treating poison.

We further researched and found a report on the official website of bombayhighourt.nic.in. As per Maharashtra Prevention and Eradication of Human Sacrifice and other Inhuman, Evil and Aghori Practices and Black Magic Act, 2013, the bill criminalises the following act: Prohibiting and preventing a person from taking medical treatment in case of dog, snake or scorpion bite and instead giving him a treatment like mantra-tantra, ganda-dora or such other things.

We further investigated by contacting National Poison Informatics Centers of AIIMS. Dr Swati Sharma of AIIMS stated that: There is a proper treatment for poison. Doctors contact them for treatments and they provide suggestions. The treatments need to be followed properly. One cannot treat any deadly poison just by saying something to the patient on call.

We scanned the profile of the Facebook user Shivraj Yadav who had shared the post. The user belongs to Guna district of Madhya Pradesh.