The post claiming you are right- or left-brain dominant depending on the colors you see in the sneaker is fake. 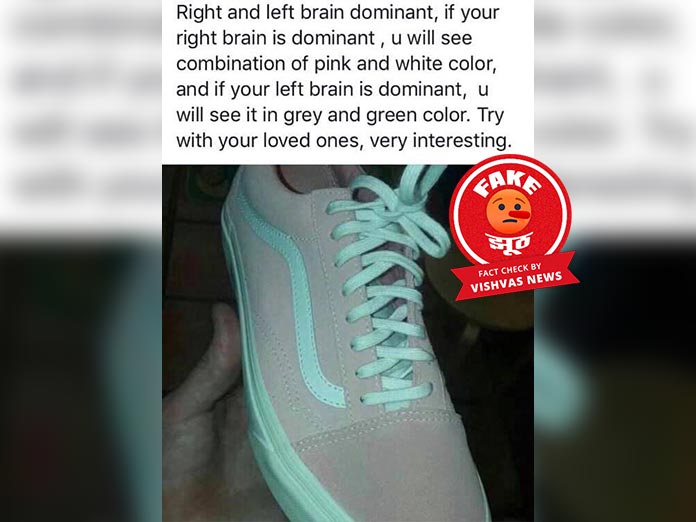 New Delhi (Vishvas News): A debate on the color of the shoe is doing rounds on social media in which people purportedly see a combination of pink and white color on the shoe or gray and green color. As per the caption alongside the photo, the color you see on the shoe reveals which side of your brain is more dominant. Vishvas News investigated the viral claim and found it to be fake.

Vishvas News started investigating the photo and found that the same version of the post is doing rounds on social media since 2017 when famous personalities shared the color controversy on their social profiles, eg. Will Smith’s post, according to People’s magazine.

Is This Shoe Pink or Gray—and Can Your Answer Really Tell You Anything About Your Brain?

According to Health.com, “It’s not clear where that theory originated, but it’s probably not true. Ivan Schwab, MD, clinical spokesperson for the American Academy of Ophthalmology, tells Health, “I don’t think I could point to any evidence, any study, that would back that up.”

As for the real reason why people see the shoe differently, Dr. Schwab says, “It’s not completely understood, but the best consideration is contextual, meaning the context in which you see it—lighting, background, what’s associated with it.“”.

“According to Don Vaughn, PhD, a neuroscientist at UCLA (tells Health): “I think what people don’t realize is vision is something you learn, it’s not something you’re given. Plenty of studies have shown that depending on what your exposure is to the world, you can actually see things differently than somebody else.””

As per a study in the Journal of Vision, “the perceived colors depend on the assumptions about the illumination.”

As per an article in Discover Magazine, according to a Science writer, “no matter how lateralized the brain can get, the two sides still work together.”

The idea that there are right-brained and left-brained people is a myth, as per Britannica.com.

Vishvas News contacted Dr. Praveen Gupta, PRINCIPAL DIRECTOR – NEUROLOGY, Fortis Memorial Research Institute, Gurugram regarding the viral claim. He said: “This is a false assumption that is propagated and shoe imagery has nothing to do with right- or left-brain dominance. It is because of how your subconscious brain visualizes light that there may be variation in color. But neither a stark color variation is visible not it has implications for brain dominance”.

Vishvas News scanned the profile of the page ‘Key detox Life’ that shared the viral post and found that the page has posted many misleading posts in the past as well.

Conclusion: The post claiming you are right- or left-brain dominant depending on the colors you see in the sneaker is fake.