Fact Check: Fabricated advisory on monkeypox outbreak attributed to WHO

The viral advisory on monkeypox putbreak is fabricated and is falsely attributed to the World Health Organization, 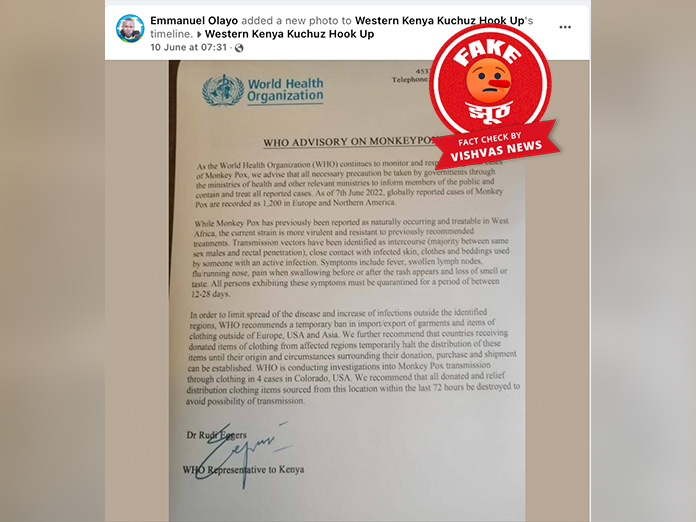 New Delhi (Vishvas News): An advisory attributed to the World Health Organization (WHO) on monkeypox outbreak is going viral on social media. As per the advisory, WHO recommends a ban on second-hand clothes from Europe, USA, and Asia. Vishvas News investigated and found the post to be fake. The advisory is fabricated and is falsely attributed to WHO.

The post shared on Whatsapp shows a letter purportedly signed by a WHO representative to Kenya warning against the shipment of garments and items outside Europe, the USA and Asia so as to limit monkeypox infections.

Vishvas News started its investigation by reading the letter carefully. We observed many mistakes in the letter. The word monkeypox is written as separate words “monkey” and “pox”. However, as per WHO, it is spelled monkeypox. Check the official report here.

Vishvas News contacted Dr. Supriya Bezbaruah from WHO. She said: “The viral letter is fabricated and is falsely attributed to WHO.”

We also found a tweet by WHO Kenya that reads: “There’s a fake letter in circulation on various platforms about #Monkeypox . #Ignore it.“

Conclusion: The viral advisory on monkeypox putbreak is fabricated and is falsely attributed to the World Health Organization,