Fact Check: Image From Nepal Falsely Shared As Kids Going To School Swinging On A Cable Bridge In Uttarakhand 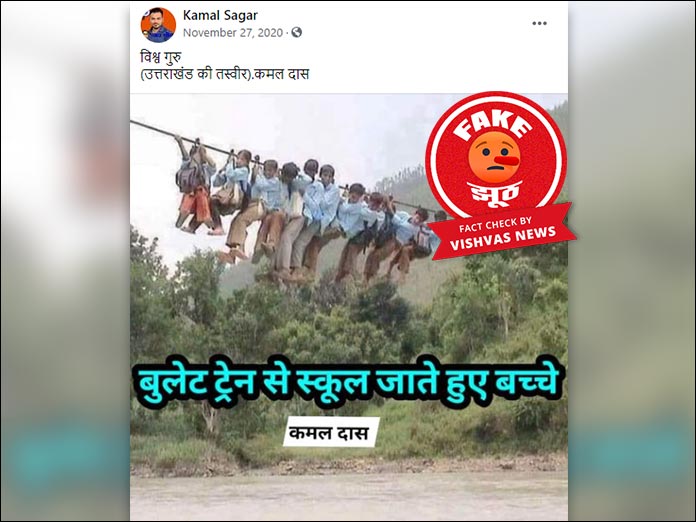 New Delhi (Vishvas News): A image widely circulated on social media shows some children swinging on a cable bridge. It is being claimed in the post that these are the students going to school in Uttarakhand.

When Vishvas News investigated, we found the post to be fake. The image from Nepal is falsely shared as kids going to school swinging on a cable bridge in Uttarakhand, India.

The post shared on Facebook by a user named Kamal Sagar shows some children swinging on a cable bridge. The caption alongside the post claims that the image is from Uttarakhand.

Vishvas News performed Google Reverse Image Search of the viral photo. We found many reports online carrying the same image. In a 2013 report,   it was stated that the image in which kids are hanging onto a cable is from Nepal.

The same image was carried out as a listicle titled “Top 10 Dangerous Routes School Kids Around The World Have To Take Everyday”.  The description below of the image in the listicle reads “In the Benighat district of Nepal, children have to use these cable ropeways to reach their school on the other side”.

The same image was also shared here stating that it is from Nepal.

We found the same photo on the website of My Republica, whose description says that “students crossing Trishuli River. All secondary level students of Buddsin village cross the river twice a day hanging on with the help of improvised sling attached to pulley wheels as the only secondary school in the region is situated across the river.”

We searched Trishuli River on Google and found that it is in Nepal.

We contacted the reporter of Dainik Jagran from Uttarakhand, Shailendra Godiyal. He said: “The viral photo is not from Uttarakhand. It is circulating on social media for quite a long time.”

The post is shared on Facebook by a user named Kamal Sagar. When we scanned the profile of the user we found that the user is based out of Nainital.

Conclusion: When Vishvas News investigated, we found the post to be fake. The image from Nepal is falsely shared as kids going to school swinging on a cable bridge in Uttarakhand, India.