Fact Check: ‘Lemons are 10000 times stronger than chemotherapy’ is a fake claim 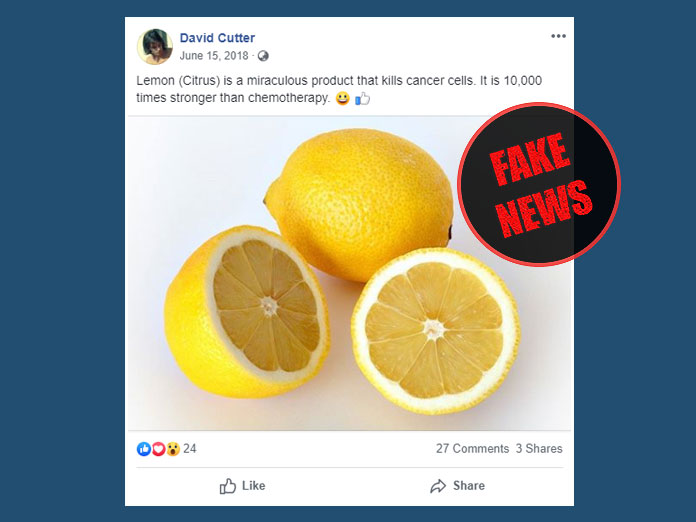 A post is getting viral on social media claiming that lemons kill cancer cells and is 1000 times stronger than chemotherapy. Vishvas News investigated and found that the viral post is fake.

A post is doing rounds on social media that reads: Lemon (Citrus) is a miraculous product that kills cancer cells. It is 10,000 times stronger than chemotherapy.

We started our investigation by searching reports on whether lemon has health benefits and anti-cancerous properties.

We found a report on ‘The Encyclopedia of Healing Foods’ which stated: “The fruit juice contains mainly sugars and fruit acids, which are made mainly of citric acid. Lemon peel consists of two layers: the outermost layer (“zest”), which contains essential oils (6 percent) that are composed mostly of limonene (90 percent) and citral (5 percent), plus a small amount of cintronellal, alphaterpineol, linayl, and geranyl acetate. The inner layer contains no essential oil but instead houses a variety of bitter flavone glycosides and coumarin derivatives.

Lemons are an excellent source of vitamin C. In addition, they are a good source of vitamin B6, potassium, folic acid, flavonoids, and the important phytochemical limonene. A 3½-ounce (100 gram) serving is about 2 medium lemons and provides 29 calories, 1.1 grams of protein, 0.3 grams of fat, and 9.3 grams of carbohydrate, with 2.8 grams of fiber and 2.5 grams of natural sugars. The phytochemical limonene, which is extracted from lemons, is currently being used in clinical trials to dissolve gallstones and is showing extremely promising anticancer activities.”

A May 2000 report by Postharvest Center, University of California explains the potential of citrus limonoids as anticancer agents. Citrus limonoids are found mostly in the seeds, fruits and peel tissues of citrus fruits such as lemons, etc.

It reads: The experimental results described above indicate that citrus limonoids may provide substantial anticancer actions. The compounds have been shown to be free of toxic effects in animal models so potential exists for use of limonoids against human cancer in either the natural fruit, in citrus fortified with limonoids, or in purified forms of specific limonoids. Although the initial studies are very promising, they have been conducted primarily with invitrocell culture and animal models. Thus, research is needed to determine whether the limonoids may be useful in preventing or treating cancer in humans.

Although, lemons may potentially harbor anti-cancer properties, but it has not been reported that it is a proven remedy against cancers of all types.

As per Dr. Manish Singhal, Oncologist, Indraprastha Apollo Hospital, lemon has certain health-related benefits, not to say that it cures cancer. If it was so simple should we stop all the research in cancer, if yes then don’t blame science later that nothing has happened in cancer treatment.

Though lemons have certain health benefits but they cannot kill cancer cells and is not 10000 times stronger than chemotherapy.