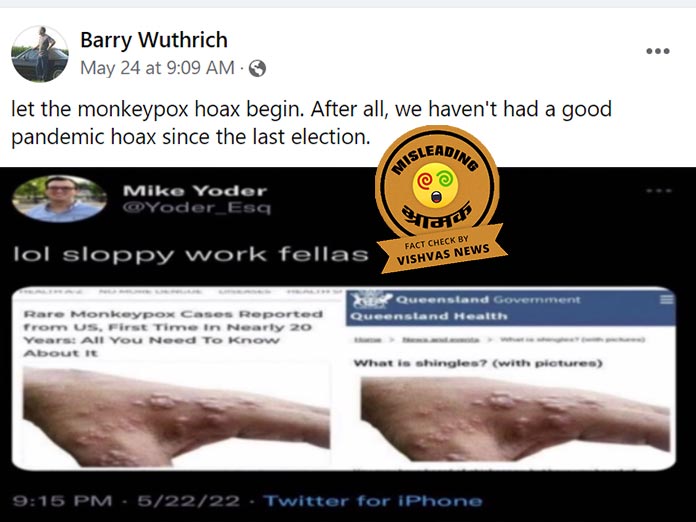 New Delhi (Vishvas News): The increasing cases of Monkeypox in the world has led to a host of misinformation emerging on social media around the disease. A viral post on Facebook is leading some users to cast doubt on the outbreak and stating that it is a hoax. The post shows two screenshots: one with a headline about shingles with a photo of a hand with lesions on it and the other with a headline about monkeypox and an image of the same hand with lesions. The claim with the post reads: “Let the monkeypox hoax begin. After all, we haven’t had a good pandemic hoax since the last election.” Vishvas News investigated the post and found it to be misleading.

The post shared on Facebook by a user named Barry Wuthrich shows two screenshots: one with a headline about shingles with a photo of a hand with lesions on it and the other with a headline about monkeypox and an image of the same hand with lesions. The claim with the post reads: “Let the monkeypox hoax begin. After all, we haven’t had a good pandemic hoax since the last election.” The archived version of the post can be checked here.

In one image, a photo of a hand with lesions can be seen. It states that these are rashes caused by shingles. The headline with the image states about shingles. Also, the image appears to come from the website of the Department of Health in Queensland, Australia. When we checked the website of Queensland Government, we found that the same image appeared in the article. It stated that: “Shingles—also known as herpes zoster—is a disease caused by a reactivation of the chickenpox virus.”

We also checked for another screenshot that appears to be taken from a website. As per other viral posts, the image is taken from TheHealthSite.com. We found that the article is from the same website but it has a different image now. We used the Wayback Machine tool to find out the previous versions of the article and found that it used the same image as shown in the Facebook post.

The article used an incorrect image of what Monkeypox lesions look like and was updated with a new image on May 23, 2022.

The same story was published on another website with the shingles photo. However, the photo was removed from this website as well and was replaced with another photo.

When we went through the story we found that the story cites the Centers for Disease Control and Prevention, which announced on July 16, 2021, confirming a case of monkeypox in a U.S. resident who had recently traveled from Nigeria to Dallas.

We searched other sources to find out whether monkeypox looks like the image of the person’s hand as shown in the Facebook post but we could not find any credible source.

We performed Google reverse image searches of the picture, though the picture has been used before to show what shingles looks like. The 2021 case in the viral post predates the current outbreak.

As per WHO, since 13 May 2022, cases of monkeypox have been reported to WHO from 12 Member States that are not endemic to the monkeypox virus, across three WHO regions.

The viral screenshot on Facebook shows the date May 22, 2022. As of May 21, 92 cases had been confirmed in 12 countries non-endemic to monkeypox, with between one and five cases found in the U.S.

The photo is misused in the Facebook post and it doesn’t prove that monkeypox is a hoax.

As per CDC, “Shingles is caused by varicella-zoster virus (VZV), the same virus that causes chickenpox. After a person recovers from chickenpox, the virus stays dormant (inactive) in their body. The virus can reactivate later, causing shingles.”

Vishvas News contacted Dr. Vikas Deswal Senior Consultant Internal Medicine Medanta. He said: “Shingles is caused by the Varicella Zoster Virus, which is a different virus, belonging to a different family, from the virus that causes monkeypox. Also, there are certain claims relating monkeypox to coronavirus, that are also completely fake, both are different viruses.”

The post is shared on Facebook by a user named Barry Wuthrich. We scanned the profile of the user and found that he is based out of Texas.